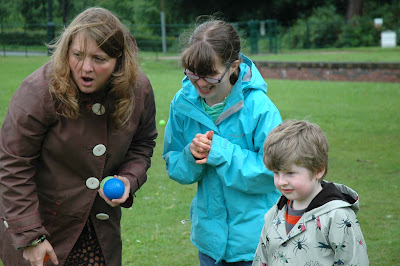 There is nothing quite like a British summer picnic in the rain.
Pitching a gazebo in the wind, weighting down your rug so it doesn’t flap and fly away, huddling in your fold-up chair, warming your hands on your thermos flask, all whilst wearing that defiant combination of a fleece and sandals. 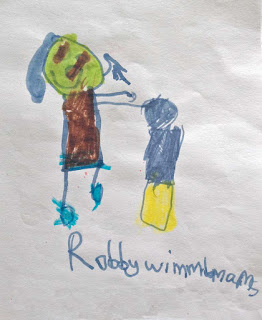 Saturday’s function was a school summer fayre (which was at a posh private school, so included a proper stage with a pretty decent sound system and lighting). The music and dance acts included ex-pupils who had gone on to appear in the West End, a rubbish blues band and a Robbie Williams tribute act. The Fake That fella was cocky, hyperactive, and sang in a cheesy, fake-accented pub-singer style. So, pretty convincing then.
My daughter took one look, and pronounced: “He doesn’t look like him.” She has a way with a pithy review. To illustrate her point, she drew a picture of what Robbie ‘Wimmlomams’ actually looks like. I think that’s the microphone he’s patting, and not a little Gary Barlow.

Sunday was the main attraction, though. This was the Prader Willi Syndrome Association Family Day at Heaton Park, Manchester. An informal outdoor get-together organised by the PWSA (UK) where families could meet and chat and the kids could play games and have a picnic (the food bit came early on, obviously, what with it always being the most important part of the day for the grub-obsessed PWS children).

We’ve been to one of these events before (see blog entry Picnic). And like before, when I met the children, who ranged in age and ability, I was acutely aware of both their uncanny similarities and their striking differences. Just like any bunch of kids.

My girl, of course, loved it. She sat, grinning, looking shyly at the other PWS children. I walked her round with her notepad, and she took a register, asking the boys and girls their names and ages. This was as much for my benefit as for hers, as I knew she’d be questioning me for weeks afterwards about who was called what and how old they were. In retrospect, we should also have got shoe-sizes and number of teeth, as these are her other Important Facts To Know About People. What was I thinking?

As the day progressed, I noticed that my daughter keep ostentatiously putting her Hannah Montana book in her bag and getting it back out to read, looking round her as she did. I realised that she was aware she was the oldest, and was showing off.
“Am I the best reader, Mum?” she asked.
“Well, yes, you probably are, sweetheart. You’re a teenager and you’ve been at school much longer than anyone else here, so you’ve had more time to learn.”
“So I’m the best, then.”
“Yes.”
She looked proud, and smug.

As we walked back to the car, I asked her what she had liked the most. She said that it was seeing Will again, an adorable boy with PWS she’d had made friends with on an earlier trip up north (see blog entry Links). This time, they’d played boules together and Will hadn’t stopped beaming all afternoon.

Who needs the sun?

Video is World Party - When The Rainbow Comes
Posted by Drakeygirl at 11:57