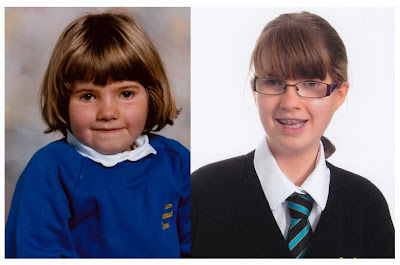 She’s a lot scruffier in the picture on the left. Her collar was crinkled. The plastic, moulded body brace that encased her torso for so many years is hidden, but I recognise the awkward way it made her clothes bunch up, giving her that American-footballer-bulked-up-shoulder-pad look. You might be forgiven for thinking the haircut was homemade (it wasn’t, but upon reflection, I might be going back to see if the hairdresser will give refunds ten years later). I like her expression. It’s a bit timid, but she’s happy. I remember her being very excited when she came home with the school photo order form. My daughter’s first school photo. Copious copies were ordered.

She’s impossibly grown-up in the new one. Although she is wearing a borrowed tie, because, of course, on school photograph day, she lost hers. There’s some metalwork you can see (the braces on her teeth), and some you can’t (the titanium rods that have straightened her scoliosis-bent spine). She looks still, and poised. It’s a bit misleading, because she’s still the same head-bobbing, funny-walking, flappy-handed, lolloper.

Two things strike me.  Firstly: bloody hell, that’s a good gig isn’t it, getting the contract to do the school pics? Are there School Photo territory battles, like the Glasgow Ice Cream Wars? If a new firm comes to town, are they sent a threatening photo through the post, with the letters made up of tiny, cut up passport-sized specimen pics of smiling kids in their best jumpers, spelling out: “PITCH FOR MY PLAYGROUND PATCH AGAIN, PAL, AND I’LL SHOW YOU A NEW PLACE TO FIT YOUR FLASHGUN"?

The second thing? My girl has come a long way in a decade. We all have.


Song is World Party - Photograph
Posted by Drakeygirl at 20:08