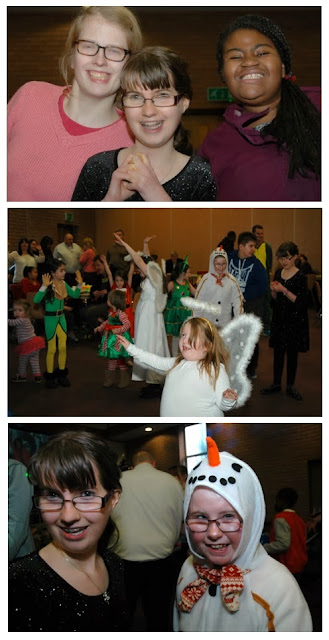 Today we gave everyone sparkly bums.

My daughter was wearing her glittery dress, bought as part of a Halloween outfit but cunningly doubling as a disco party frock this afternoon. She left a trail of silver specks wherever she sat.

The party that merited the spangly outfit was a Prader-Willi Syndrome Christmas Party: a collection of chromosome blip-sharing youngsters who gathered together at a church hall in Enfield, along with parents, friends, and siblings. Some of the kids were dressed up: there were elves, fairies, superheroes, a snowman, and even a matching Dad and son crocodile onesie combo.

My girl launched into her usual fact-finding mission. “Who’s got Prader-Willi?” she asked the girls sitting at the craft table making paper chains with her. Introductions were made, names, ages, and PW yesses were noted. Shy grins turned into big, beaming smiles.

One 18-year-old girl swapped email addresses with me so I could send her a photo. We’d never met before, but she was incredibly familiar to me.  I kept looking at her: her glasses slipping down to the end of her nose; her dipped head and laugh, her hands being constantly wrung with excitement; her slightly off-kilter questions; her body shape; her voice; her language; her wonky smile, her mannerisms; her happiness. I realised, with a jolt, that she was my daughter’s  doppelganger. The likenesses were uncanny.

Santa was all set to make an appearance. The suspense was too much for my five-year-old boy, who went into meltdown over how long it was taking the Man In Red And White to get there, and would simply not accept 'traffic jams' as an excuse for the delay. “He can just fly over the cars,” he squealed, his perfectly reasonable logic delivered perfectly unreasonably. “That’s my son,” I explained to the woman I was chatting to, as the red-faced, sobbing boy in a Superman costume was dragged off by his dad into a corner to be Told Off. “He’s not got Prader-Willi, he’s just got the hump.”

Father Christmas finally appeared. My heart lurched. The party was being held in the hall of a Mormon church, and earlier on my girl and I had been talking to an American chap, who turned out to be one of the Salt Lake City Squad. (By the way, Mormons, no caffeine? No tea or coffee allowed? Who knew?). Anyhoo, we’d all discussed his accent and how people from different countries spoke differently. My girl had paid very close attention. So when Santa started handing out presents and wishing the boys and girls Merry Christmas in a familiar American accent, I whispered to my husband: “She’s going to realise who it is.” My girl, who had been commandeered by her new 18-year-old twin into helping pass Father Christmas the gifts, had had plenty of time to put two and two together. She marched over to me, clutching her own present, her face flushed with a revelatory blood rush.

“You know how Santa can’t be everywhere, and sometimes he has helpers being Santa instead of him, Mum?”
“Yes.”
She grinned.
“Well, I think this is actually the real one.”


Song is The Posies - The Glitter Prize

Many thanks to all the parents and volunteers who made today such a special event.