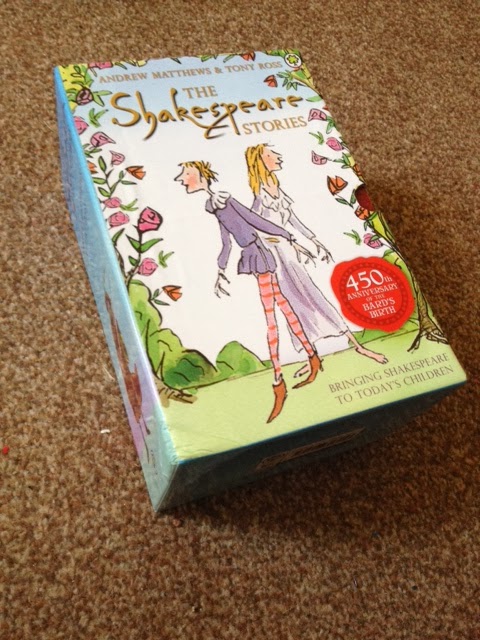 A Shakespearian drama has been playing out at our house today.

The heroine is an obsessive teenage girl with Prader-Willi Syndrome, who decided to save up her pocket money for a set of children’s versions of famous William Shakespeare plays.

The villain is a butter-fingered warehouse stacker or slapdash courier driver who didn't treat the package with the reverence it deserved, leading our eagle-eyed protagonist to notice a small dent on the corner of the set’s slipcase.

This is the daughter who can extemporise for hours on the tiniest fold on the page of a library book. Naturally, the thought of an ever-so-slightly bashed-in corner is dinging around her brain like a perpetual motion pinball.

Trying to ignore the fact that my brain was mischievously transposing this to: “Is this a dent I see before me? The squished bit towards my hand?", I sat her down and had a chat with her about how it’s the stories that are important, and that a small imperfection shouldn’t matter. (Yeah, I know, I know, it's like a metaphor, right, for her chromosome disorder, isn't it? Well, yes. Or maybe it's just a dent that's really annoying her.)  Well, we had a chat, and I'm sure I got through, and I'm convinced that she took on board all my points, which were clearly and patiently explained.

Yes. Yes, I am sending it back for a replacement.

It was no surprise when Shakespeare, and dents, came up in conversation around the Sunday dinner table, later.

We did have a random pop star thrown in, just to particularly bamboozle the easily-bamboozled Grandma.

My daughter (once she’d methodically hoovered up every last scrap on her plate, of course) declared: “I like Shakespeare. My box is dented. I like Romeo & Juliet. Can you see the dent, Grandma? It’s on the corner. I like Shakespeare. I like Michael Jackson.”

“Yes, he did Thriller.” My daughter rushed the words out a little, so it was a bit hard for Grandma to catch what she’d said.

“He did what? He did Othello?”

Now I had an entirely new image in my head. Michael Jackson, as The Moor, declaring his love for Desdomona (looking suspiciously like Bubbles the chimp, in a dress), clutching a box of books. A box with a dented corner.

Track is The T.S.U. Tornadoes - Getting The Corners