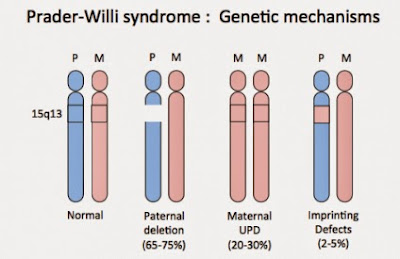 This week is PWSA UK Awareness Week. The Prader-Willi Syndrome Association UK want to spread the word about the rare chromosome disorder. They want more people to know about the syndrome, in an effort to allow children and adults with PWS to be understood and accepted, and to make more people across the country aware of what the condition means for PWS people and their families, friends, and carers.

Genetics is complicated. There is no medical explanation, for example, for the existence of Katie Hopkins. We do, however, know a bit about the genetic causes of Prader-Willi Syndrome.

I am now, foolishly, going to try to explain it. I’m taking a big breath, and diving in. Any scientists reading, feel free to pull me out when I start to panic...

Most of our body’s cells contain 46 chromosomes (23 from our mother and 23 from our father). These tiny structures are packages of genes which contain the instructions our bodies need to grow, develop and function properly. (The ‘saying no to a glass of wine’, ‘ever wanting to vote Tory’  and ‘dancing without looking like a numpty’, packages in my DNA are missing, obviously).

Egg and sperm cells normally contain just 23 chromosomes, so that they join up in conception to provide the baby with the 46 needed. The joining up bit is where changes or errors in genes and chromosomes can occur. I am a big fan of the joining up; not so keen on the errors.

Many genetic disorders are caused by a change in a single gene and can be passed down from parent to child. But Prader-Willi, apart from some exceptional cases (see below), is not an inherited condition; it just happens. More than one gene is involved, but they are all near to eachother in an area of one particular chromosome: chromosome 15. Every case of PWS is due to the baby not receiving active genes from this particular area of the father’s copy of chromosome 15. The mother’s genes in this area on her copy are ‘turned off’ because of a rare process called ‘genomic imprinting’. (Anyone else think this sounds like a phrase for a typo on a Snow White And The Seven Dwarves poster? Oh, just me then).

There are at least three different chromosome errors that can keep the key PWS group of genes from working normally:

1) Paternal deletion
About 70% of all cases of PWS are where - with no known explanation - the critical PWS section of chromosome 15 (or The Bastard Bit Of The Bastarding Bastard, as I like to call it) is missing. The section has disappeared, and there’s no rhyme or reason to it. (Although a rhyme would be pretty rubbish: ‘It’s a paternal deletion, our blinds are Venetian’. See?). The deletion is inexplicable, and there is a less than 1% chance of it happening in another pregnancy. This is the genetic reason for my daughter’s PWS.

2) Maternal Uniparental Disomy (UPD).
Yes, this sounds like a Peel Session. “A great live track from Maternal Uniparental Disomy there - three more from them later...”. UPD is a less common form of PWS (about 25% of cases are caused by it), and it is where the baby inherits both copies of chromosome Bastarding Bastard from the mother. Even though there are two complete copies of the chromosome, the key genes are imprinted - ‘turned off’ - resulting in PWS. This has the same effect as a deletion. Again, there is very little chance of this happening again in a further pregnancy (in fact, it never has).

3) Imprinting Defect
In very rare cases (less than 5%), the PWS genes on the father’s chromosome are there, but do not work because his imprinting process is faulty. Chromosome 15 has a tiny little control centre (imagine the bridge of the Starship Enterprise), which is responsible for ‘switching on’ all its genes. When there is a tiny defect in the imprinting control centre, the PWS section may not be switched on correctly. (Imagine if Captain Kirk accidentally knocked out a power lead when having sex with a green alien woman while his shipmates were in the canteen. That sort of thing). An imprinting defect can appear suddenly, or can be present in the father’s chromosome he received from his mother. If the latter is the case, then there is a 50-50 chance that any child he has will receive the defective chromosome, because, crucially, the defect has now crossed to the father’s side. Further testing and genetic counselling are hugely important for families with a child whose PWS is caused in this way.

So, I hope I’ve made that all clear. References to Snow White and Star Trek may or may not have helped. I don’t think a quick burst of Heigh Ho! or a panic about the reoccuring shortage of dilithium crystals has anything to do with Prader-Willi. Although an urge to be beamed to another planet does occasionally cross my mind.


Video is Mull Historical Society - Minister For Genetics And Insurance MP
Posted by Drakeygirl at 12:16