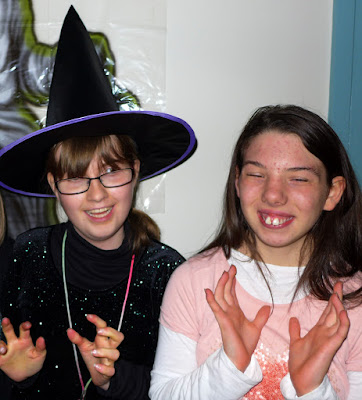 Half term is over.

Well, it’s over for my little boy, who's back at the coal face tomorrow, but not for his big sister, because her school has a teacher training day. Wish me luck in the morning with explaining that to a belligerent six-year-old who is already a black belt in “It’s not FAIR!”.

Much of the week has been spent tag-teaming with my husband, taking said boy down to the skatepark on a dragon-embossed skateboard given to him by my next door neighbour. He’s basically taught himself to skate in a week, thanks to YouTube videos. He’s also learned how to speak the lingo, with his sample shouts of encouragement to the bigger boys doing ramp tricks on their scooters being: “Yo, dude, that was epic!” and “You really nailed that, man!”.

My daughter went for her traditional holiday sleepover with her Prader-Willi Syndrome Best Friend Forever. They went to the cinema (see her incisive review here), went to Pizza Express for a leggero (a pitch-perfect, sub-500 calorie, PWS-friendly pizza with a hole in the middle filled with salad), they chatted, caught up with Eastenders, rang me giggling several times on my girl’s new mobile phone, walked PWS BFF’s dog, and had a generally lovely time.

My girl also attended a Halloween party with a couple of friends from school, and looked very glamourous as a glittery witch. We did the trick or treat thing last night, too, with the usual pre-planning (only visiting relatives and close neighbours, with plenty of no-sugar wine gums and low-cal snacks on hand ready to switch with the normal round of lollipops and Halloween-themed sweets). My daughter was quite happy with her ‘special treats’, my son was ecstatic with being slipped her share of chocolate eyeballs when the swapsies were made, and they were both in bed by 8.30pm, which was a blummin’ treat for me.

But it was only today that I realised that there has been an overarching theme, a narrative arc, a subject that has dominated half-term. 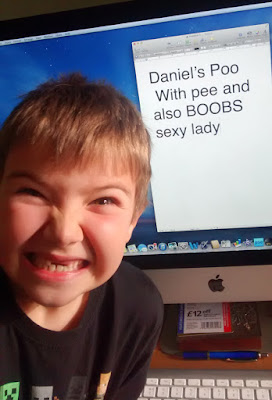 They first surfaced at the start of the holidays when my son showed an unexpected commitment to continuing his education at home, and asked to go on my computer to practice ‘typing words’ (see photo).

They reared their nipples in the middle of the week, when my daughter, in an escalation of a recent obsession with having dry skin, decided to rub her chest until it was sore because she was concerned about having ‘appendicitis in her breasts’.


And they unexpectedly took centre stage today when I took my mother-in-law back to her care home after having her over for Sunday lunch. An extremely elderly man beamed at me as I was walking along the corridor, and it was a moment before I realised his eyes were fixed firmly on my breasticular area. And then he uttered the immortal words: “Hmmr, argghatuban mmm, ggrgree. BANGERS!”