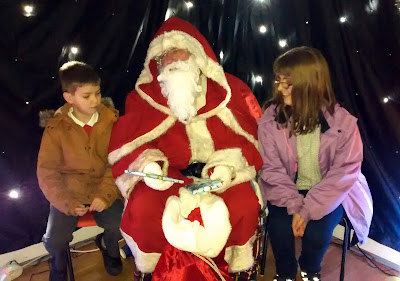 My teenage girl emerged from Santa’s grotto, clutching her present to her chest. My little boy followed behind her, handing his present over to me. I piled it on top of the sticker set, two teddies, and two overflowing ‘crazy cups’ we’d bought/won on the stalls at the school Christmas bazaar. These in turn were teetering in a Giant Jenga-style pile of coats, hats, bookbags, and a cycle helmet. My arms were beginning to ache.

“I’ve run out of hands!” I complained.

“We’ve got six between us,” nodded my boy, sagely, before running off to find his scooter, without helping me unload.

My daughter, the one who has announced that she doesn’t believe in God but still believes in Father Christmas, gave me a hopeful look. She’s got this whole “Santa has helper Santas so it’s not always the real one” thing going on, but I could tell she’d been quite convinced by this particular Santa’s spiel.

“Do you think that was the real Father Christmas, Mum?” she asked, her eyes shining.


A voice piped up from behind her. Her brother had returned, riding his scooter. “Nope," he told her, as he whizzed past. He looked back over his shoulder. "That was Mr Barker. I recognised his voice.”

Song is Sharon Jones & The Dap-Kings - Big Bulbs
Posted by Drakeygirl at 17:59