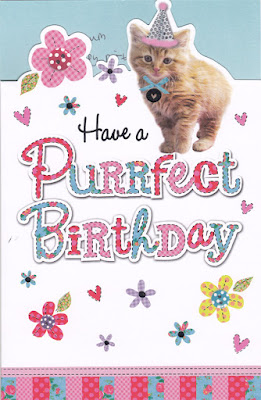 This time of year I have to do my subtle hint thing.

My subtle hint thing is dropping felt tips and paper under my kids’ noses and ‘suggesting’ they might like to make me a birthday card, and that they won’t be going on their computer console/tablet until they’ve done so. It’s brutal, but effective.

So I got a slight shock when my son announced he’d already done it (I suspect after similar subtle hints from his dad) and my daughter said she didn’t need to.

Now, my girl’s choice of language was interesting. And, as it turned out, specifically correct. Because yesterday, when she was doing her weekly ‘practising shopping’ trip down the town with the school, armed with a few quid from me and a little list of groceries, she’d BOUGHT me a card from Poundstretchers. Off her own back. Without it being on her list.

This seems such an inconsequential thing, but it’s not. It’s really not.

I’ll admit I was moved when I opened the card this morning. Then, when I realised my alarm hadn’t gone off and we were running approximately half an hour late, the only ‘moving’ thing going on was me trying to get the kids to school on time.

One last thing. In the interests of fairness, and the wish to express my perfectly equal gratitude for my children’s cards - I will share with you what my son made:

A Minecraft war memorial and skeleton on the back.

Video is Teenage Fanclub - I Don't Know
Posted by Drakeygirl at 14:56