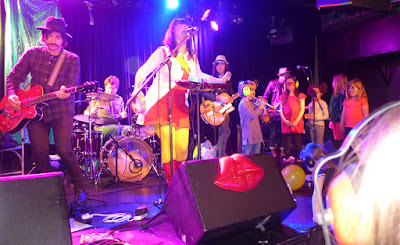 To other eyes, my daughter might not have looked especially engaged. Compared to some of the hardcore teeny, tiny, indie kids jumping and dancing around at today’s child-friendly gig, she was particularly sedate.

Although she’s not diagnosed with autism, her syndrome, PWS, overlaps with it. Loud noises and loud music can overwhelm her. And her poor muscle tone and shyness in a room full of people means that she is unlikely to be overtaken by the urge to jitterbug, or, indeed, bodypop. 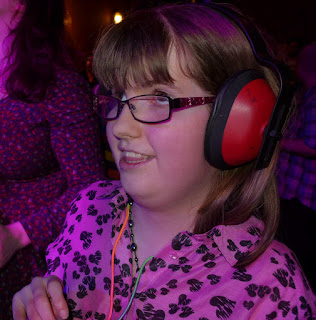 So, of course, her ear defenders were clamped on firmly as soon as there was any chance of a band appearing on the stage at the Little Loud Women matinee show at The Lexington, in Islington. She displayed no discernible signs of wanting to wig out. She sat, wedged on her bench seat, unwilling to go any closer to the stage for the first three bands.

She was, however, paying close attention, and attributing her own unique ratings: Argonaut she liked, because “they were the quietest”; The Wimmins’ Institute were also good, because "they weren’t as quiet, but they kind of were” (plus “they did a song about pirates that said you didn’t need a willy to be one, and that was very funny, Mum”. I myself thought the “Yo Ho, let’s go!” line was the winner). But the punchy, punky indie rock from the lively Crack Foxes was dismissed, instantly, for yes, you guessed it, “being much too loud”. When the singer announced that the next song would be their last, my daughter’s unfair and purely volume-based antipathy towards a stomping cover of These Boots Were Made For Walking was made plain to all around her when she blurted out: “Thank God for that!”. 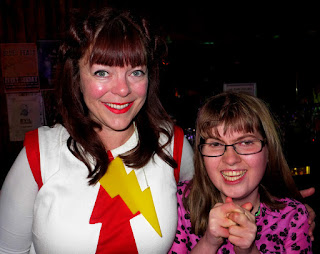 And then something astonishing happened when Piney Gir came on. My girl and Piney have history. She’s seen her and her band from a 'safe' distance a couple of times at Daylight Music gigs at The Union Chapel, had several shy chats with her, and has been thrilled with her signed copies of CDs.

So I chanced my arm, suggested that we got up off our seat, and held my daughter's hand as we walked forward the few metres to stand directly in front of the stage. My friend and her two daughters were already there (one of her girls nonchalantly joining the band on the stage as they set up their instruments, along with a posse of other wannabe roadies). My girl looked up at Piney, nervously checking her ear defenders as she did so.

And stand there we did, as the band served up a slice of their sunny, melodic, and...well...to be honest, a little bit loud, indie pop. My girl still looked on edge, so I decided a minor tactical retreat of just one step back might relax her. It seemed to do the trick, and I watched as she whispered along to familiar songs, partook in some slight toe tapping, swaying, and even a little sidestep or two.

It doesn't sound like much. But what she did, to stand there, right there, so close, for her, for me to see, was the equivalent of a full-on pogo in the mosh pit. 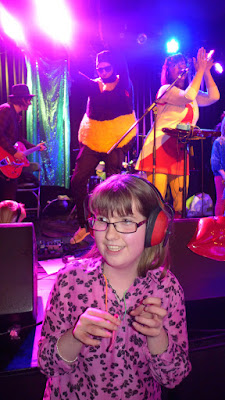 I thought it couldn’t get any better. Then a giant bee turned up. (If you don't believe me, check out the photo). And then Piney had some vinyl copies of her latest album for sale on the merch stall, and she signed one for my girl, who now has a Piney record, just like Mum and Dad’s records, just like the Taylor Swift LP that is the only other record in her burgeoning collection of...well...two. Two records.

On the way to Kings Cross Station, we bumped into a Crack Fox coming out of a restaurant. “You were at The Lexington!” I blurted out, inanely, as I did that double take-do-I-know-you kind of thing with the guitarist. “I didn’t like you, you were too loud,” my girl announced as she walked past. Hopefully her voice didn't carry...