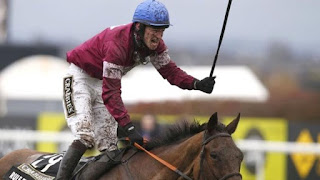 We decided to do the old home-made sweepstake for today’s Grand National.

I took the kids round to Nanna and Grandad’s, we snipped out the horses’ names from the newspaper, stuck them in a bowl, and each of us picked out eight.

We decided on a stake of £2 per person, bringing the pot of winnings to a grand total of a tenner. Rather than let one person win the lot, I thought a £4 for 1st, £3 for 2nd, £2 for 3rd and £1 for 4th arrangement would prevent arguments for sore losers.

It wasn’t until they were under starter’s orders that I remembered how excruciating it is to watch a race with my daughter. From the first hoofbeat, she’s emoting loudly, directly into my left ear, anxious at every faller, asking if her horses are out or in, winning or losing, if they will finish, if they will win, if not why not, etc, etc. I forgot about the worry levels. Meanwhile, her brother is yelling into my right lughole that he doesn’t know which are his horses.

“I can’t hear! Quiet! I don’t KNOW who is going to win, they haven’t finished yet!” I exclaim.

As the race goes on, I see a lot of my boy’s horses falling, and start to think that maybe it’s him that is going to cause a problem today. He’s not the one with special needs (or special knees), but he can be a right mardy-arse when it comes to losing. I cross my fingers and hope that he gets a horse that’ll earn him at least a pound or two in winnings.

He didn't. My girl has the first three horses.

My boy is losing his shit. My girl is grinning. £9 is coming her way. Grandad is bagging the final quid. I’m six quid down as I paid for mine and the kids’ stakes. Why did I think this was a good idea?

Then I find out the winning horse is owned by Michael O’Leary, the owner of Ryanair, or as I like to call him Mr Fiddler (the grasping ‘that’s a paaaooound’ farmer from Carry On Camping).

I understand now. I understand the feelings of anger, frustration, temper, bitterness, and penury that my son feels. It’s just like flying on Ryanair. The jockey probably had to pay to take his saddle into the winning enclosure. He’ll also have to sort out a taxi to take him to his hotel tonight, which will be at least 40 miles from Aintree.

I’ll forget, of course. We’ll do it all again next year. Once more unto the Becher’s Brook, dear friends.


Song is The National - Racing Like A Pro
Posted by Drakeygirl at 19:57