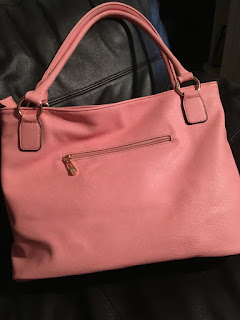 My daughter’s no-nonsense teacher asked her special needs sixth-formers to get ‘age appropriate bags’ over the summer holidays. Now, after five weeks of my two children at home, I’m the one with ‘age appropriate bags’ under my eyes, but I know what she meant. Mrs D felt that it might make my daughter and fellow pupils in her satellite class at mainstream school feel more grown up and more like the other students if they weren’t carrying round Minions packed lunch boxes and Hello Kitty satchels. Saying this, I vaguely remember wearing a Thomas The Tank Engine cardigan when I was a sixth-former, but I was a shocking attention seeker...

So today we went shopping, and my girl found this one. A pale pink faux-leather handbag big enough to fit her packed lunch box/school diary/pencil case/rain mac/purse/phone into. All the essentials.

She was utterly delighted with it. I swear that she was more thrilled with her cheap and cheerful shoulder bag than a reality star from The Only Way Is Essex would be with the latest Louis Vuitton.* (*Please note, I couldn’t name anyone from that show, and I had to Google ‘popular designer handbag brands’ to make that comment. I can tell you the name of the drummer in The Pogues, though, so I do know about important stuff).

We followed up our shopping expedition with a scheduled appointment with my daughter’s neuro-psychiatrist, where The Prof was duly amazed at her animated chit chat (my girl is normally a little shy with him). I explained that I didn’t think it was a sudden re-occurence of the extreme highs (part of her mild bi-polar type mood disorder that he has helped keep under control brilliantly over the past couple of years). “She’s just on a handbag high,” I explained. “Ah, my wife has those,” he nodded.

As if her day couldn’t get any better, I then took my glowing girl to Pizza Express for lunch, where a concerned waitress warned that my daughter’s order of Leggera (Light) Pollo Arrabbiata might be ‘too spicy for her’. My peri-peri, chilli, tabasco, reggae-reggae sauce-loving girl threw the woman some proper shade and pronounced: “That’s the POINT.”

But she hadn’t finished making me smile. I asked her if she wanted to go to the toilet before we left. She looked at me, earnestly, and answered in a flash: “Yes. I don’t want to wee in the street like a dog.”

Song is Shane MacGowan And The Popes - I'll Be Your Handbag. It's inappropriate and sweary. But that's the POINT.