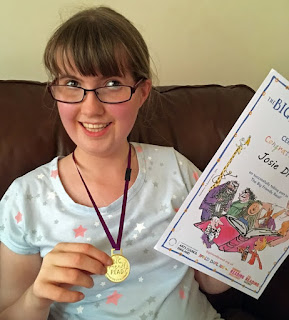 We’re into the second week of the summer holidays. I’m still sane.

My boy spent five mornings of the first week at the Baptist Church Holiday Club. He’s going to the Anglican Church Holiday Club later on in the holidays because I believe in a multi-faith society, particularly when it comes with cheap as chips childcare.

Meanwhile, my girl read. And then read some more. 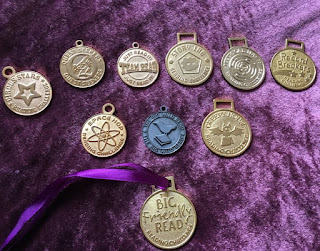 In fact, she’s completed the library’s Holiday Reading Scheme already, which a weight off my her mind, my mind, and everyone’s mind. After years of taking part in the scheme, - which requires children to read six books to get a certificate, but 18 if they want a medal - she’s finally stooped to the tactic of choosing really easy books. (When I’d previously suggested this to her, I’d got short shrift).

So she’s read ’em already, and got another medal for the collection (the one with the ribbon, pictured). This is despite her being over the age limit for the scheme now, and being encouraged by the ‘library lady’ each year to switch to the scheme for older teenagers.

My daughter politely declines. “I don’t want to do that, thank you. You don’t get anything.”


She’s still got her nose in a book, mind. She’s reading Harry Potter, in preparation for our upcoming visit to the Warner Bros. Studio tour. We’re going to watch the films again, too, although with some tricky pausing and forwarding. “I don’t want to see You Know Who, because I’ll have bad dreams,” she decrees. So we’re going to have to do a Harry Potter marathon minus the Voldemort bits. It’s given me an idea: if my little lad wants to watch the Godawful Star Wars prequels, I am only going to agree if I can apply a similar censoring technique, and cut out Jar Jar Binks.

Song is David Bowie - She's Got Medals
Posted by Drakeygirl at 20:24