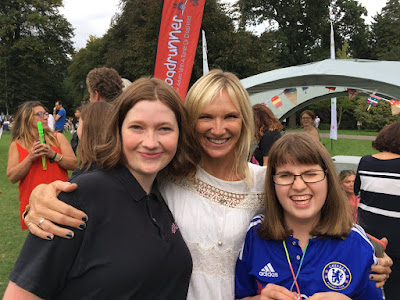 I had my mobile phone clamped to my ear as I rang Rachel, my daughter’s PWSBFF’s (Prader-Willi Syndrome Best Friend Forever’s) mum.

We were due to meet them at The Rockin’ Roadrunner Club’s Seaside Festival, a music festival in Northampton organised with and run for young people and adults with disabilities. A band was playing on one stage, dancers were strutting their stuff in front of another, and queues for the ice cream van snaked round us.

“We’ve just arrived - whereabouts are you?” I half-yelled into the phone, raising my voice above the general hubbub. “Can you see the helter skelter and the stage just behind it?” came Rachel’s reply, loud and clear in my ear. “Yep, we’re really close to that. I’ll stand and wave.” “OK, so will I.” 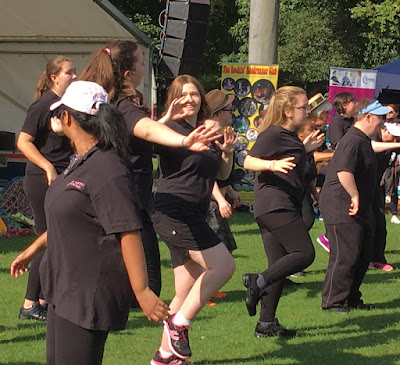 At this point, we both turned and flapped our arms about. The reason I know that she turned and flapped like me was that we were actually standing pretty much back-to-back with eachother, so close we could have high-fived if we’d have been a bit quicker about it. It explained why we’d been able to hear eachother so clearly.

PWSBFF was about to go on stage with her disabled dancing club. My girl clenched and rubbed her hands together in excitement. PWSBFF didn’t disappoint, performing a dancing/sign language routine to Cliff Richard’s ‘Summer Holiday’ with tremendous gusto - completely unfazed by the crowd.

Soon after, we followed her over the the main stage, where she took part in another set of routines, including a rather balletic one to an Adele song (don’t ask me which one, it was one about her being pissed off at her boyfriend. I realise this doesn’t narrow it down...)

Afterwards, we congratulated PWSBFF on her confident performance, and Rachel, to my delight, congratulated me on my arse. (I’ve lost some weight and had fitted into some more slender jeans than she’d seen me in before, and not only will I take an arse compliment whenever I can get one, I will bloody well write about it here so that there is some kind of official record).

It was snack time, so we gave the girls some nuclear-strength purple food-colouring Cherry Brandy lollipops, leaving them with stained teeth, tongues, and lips. 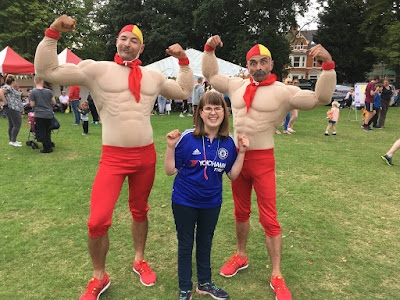 On the hunt for fun photo opps, I got my girl to flex her muscles with some unfeasibly-muscled, historical Baywatch types (who looked suspiciously like the stilt walkers from the last Rockin’ Roadrunner event we went to).

We then headed towards BBC DJ and all-round good egg Jo Whiley (an ambassador for Mencap, who often DJs for Rockin’ Roadrunner events along with her sister Frances - who has learning disabilities - and whose family helped found the club).

“Can the girls have a photo with you?” I asked, having seen Jo pose for scores of similar requests with patience and good humour. “Of course!” she smiled, immediately chatting to PWSBFF about her performance after noticing her dance club T-shirt. In the meantime, I shot out a hand to grab my daughter as she wandered straight past Jo, on her way, presumably, to stand next to the tombola stall-holder. (If my daughter could summarise her narrow celebrity recognition factor it would be: ‘If you ain’t in Eastenders, you ain’t famous, mate).

We couldn’t stay too long, for Prader-Willi Syndrome hot meal timing related reasons. But we enjoyed our mini-festival, and our wanderings in the throng of happy, smiling faces.

These events are something special. Seeing so many people with such a varied range of disabilities, watching, taking part, manning the stalls and carrying out a range of jobs, organising, running and enjoying the day, is special. Seeing my girl so pleased to meet up with her friend is special.

The next Rockin' Roadrunner Club event is a Christmas Club night at The Roadmender, Northampton. More details coming soon on their website, here.
Posted by Drakeygirl at 22:41