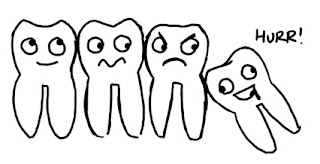 Approximately three minutes after explaining to the dentist that my daughter’s syndrome means that she has difficulty controlling her emotions, she put on a pitch-perfect demonstration, and it was a corker. We had a full-on meltdown, with angry sobs and streaming tears. And it wouldn’t stop.

Her usual dentist had referred her to a chap at a different practice who is apparently the bod to go to for wisdom teeth extraction. We’d booked the day off school, and it was expected that her two bottom extra gnashers were going to be wrangled out in the surgery after a numbing injection.

But upon examination, the nice man explained very patiently that actually, now he’d seen the position of my girl's teeth for himself, he felt it best she be booked into hospital and have all four of the buggers out at the same time, under anaesthetic.

Oh dear. He tried to get across that this was necessary and would be the most comfortable for her (even taking into account her high pain threshold), but that really didn’t matter. Because the ‘best plan of action’ was not the expected plan of action.

I should have given my daughter a Plan B scenario beforehand. I normally do. It was a rookie error. I should have primed her with a: ‘of course, that’s what is supposed to happen today, unless...and if not...then this will be what we’ll do.”

But I hadn't. So the change threw her into a tizz. “What was the point of coming if they don’t take them out?” she half-sobbed, half-shouted. “Why did the other dentist say I’d have my teeth out TODAY?” She was fully distraught, fully blinkered, and totally unable to listen to any rational reasoning from anyone in the room, including, especially me.

I did the only thing I could. Hugged her, waved the worried dental nurses away with a wink, mouthing: ‘She’ll be fine”, and walked my crying daughter out to the car and home.

She was fine. Later. After two hours. The waves of emotion had white-watered and crashed, and rolled back out to sea, and she was ready to take in the logic of the new plan.  Her inconsolable devastation at a ‘Big Change’ seemed like it had happened to a different person.

And, as always, always happens, a difficult day was very soon followed by a good ’un.

She returned home from school this afternoon to say she’d enjoyed working on the school farm (yes, her school does actually have a farm attached to it - you calling us Country Bumpkins, loverr?).

“We were doing sheep stuff, Mum - you know, sorting them.”
“Sorting them how?”
“Putting the girls away from the boys.”
“Oh, I see. And...er...how did you tell the difference?”
“Well, the boy sheeps have testicles.”
“Oh, right.”

“And a penis.”
“OK.”
“But the girls don’t.”
“Wow, well, I didn’t realise you knew how to tell the difference so well.”
“Oh it’s easy. It’s just exactly the same as sorting humans you know - you look between the back legs for dangly bits.”