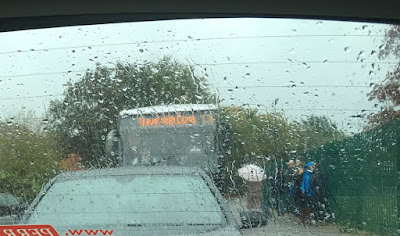 The rain was pelting down. But she had a sturdy pair of walking boots on and a tough waterproof mac. And a bag with loads of changes of clothes in.

The coach was taking her and 18 other special school students on an NCS (National Citizen Service) residential trip to Staffordshire. It's a David Cameron Big Society thingy (remember that?) which sounds a bit like the Hitler Youth, but I think is more kind of Duke Of Edinburgh-lite. (Dear God, David Cameron, Hitler and Prince Philip in the same sentence, there's an Unholy Trinity if ever I've heard one).

I went for a swim after dropping her off (in readiness for my upcoming Swimathon for the Prader-Willi Syndrome Association UK) and by the time I got out I had four answerphone messages and two texts from her. The lockers must have been echoing to the sound of my ringtone, One Step Beyond. Had I packed her retainers? The answer she needed to hear was, thankfully, yes.

I later got a call from the school's Acting Head. It had transpired that some kind of double booking issue meant that they weren't going to the venue they had planned, and in fact had ended up going to somewhere in Kent instead. Quite how the school staff managed to get 19 kids with special needs and anxiety issues to take that in their stride, I don’t know. But, apparently, they did.

So she’s there, and by now she’ll be tucked up in bed, fast asleep and knackered, and she’ll be doing all sorts of team bonding, independence skill-improving things over the next two days before returning home on Tuesday. Probably with a bag full of someone else’s clothes, hair matted with shampoo she’s not managed to wash out properly, and ready to sleep for a week.

Video is Madness - One Step Beyond
Please consider sponsoring me to help raise money for the Prader-Willi Syndrome Association UK. Just Giving details here.
Posted by Drakeygirl at 21:52