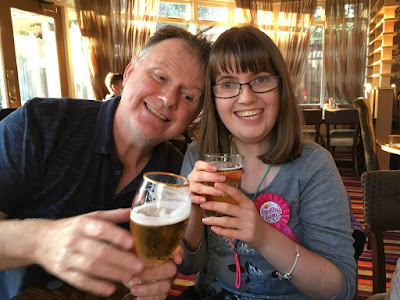 Today, we took our 18-year-old daughter to the pub for a shandy.

In my handbag was her passport, in case she got challenged about her age. (She didn’t, probably because she looked such an unlikely 18 that the only possible explanation was that she was actually 18). 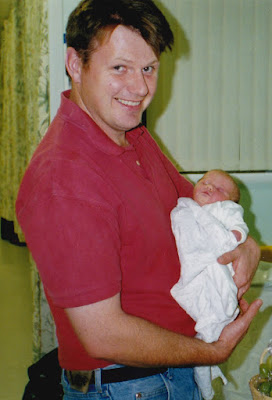 “You shouldn’t drink too many beers like Phil because it’s bad for your liver,” she said, loudly, as we walked past a table of blokes, one of whom may have been called Phil, by the look on his face. (She was talking about Phil Mitchell, in Eastenders, by the way).

We stayed for tea, and she nursed her half pint of shandy (or ladybeer as she had christened it), for approximately one hour and thirty five minutes, announcing - with every tiny sip - that she liked it.

Her new charm bracelet jangled on her hand. Her Nan and Grandad came along and gave her a set of books and a book-shaped charm. A friend popped in, having followed the ‘Gone to the Yorkshire Grey’ note left on our door, and gave her a set of silver star earrings. When we returned home we had three phone calls, a Facetime, and two more visitors bearing gifts, which included money, a downy soft dressing gown, and a bottle of fancy champagne (Yes! One glass for her and five for me!).

I called for my daughter to come to the bathroom for her shower for the fifth time, and joked: “Are you even listening to me? Is it all that shandy you had?”

She appeared in the doorway with a haughty look on her face. “I had ONE. I am NOT drunk.”

Eighteen years ago she was born and we were swept up in the hurricane of a disability diagnosis.

Eighteen years ago, the future was terrifying and bleak.


Today, we took our 18-year-old daughter to the pub for a shandy.