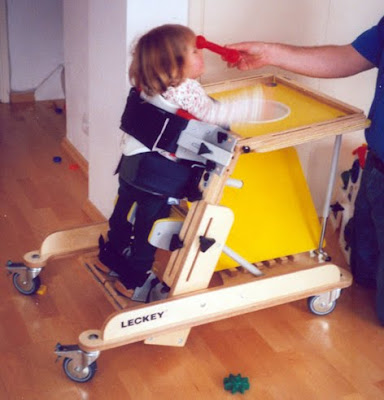 “Nobody expects the Spanish Inquisition!”


Without fail, this was the phrase we uttered when strapping our daughter into this monstrous contraption.


I think it was called a standing frame. We just referred to it as The Rack. Although we were overegging the pudding a little: it didn’t ‘stretch’ her legs, just held them in place, to stop her weak knees buckling. The idea was to provide a rigid support for her legs, to allow her to stand up for a few minutes and gradually build up her muscle strength.

As well as The Rack we had The Cricket Pads. These were velcroed together round our daughter’s legs, and we would stand her up against the sofa, arranging her toys on the seat cushion in front of her, to encourage her to spend a few more precious minutes in the unfamiliar upright position.


This was usually accompanied by one of us singing: “I don’t like cricket-ah! Oh no! I love it-ah!”