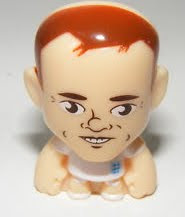 We’re moving house next week, for the first time in nearly 12 years.

Packing, as you can imagine, is a delight.

Mainly because of the considerations I have to take into account when squeezing the overflowing contents of my daughter’s bedroom into an acceptable number of boxes.

You see, I can’t use this opportunity to surreptitiously chuck out a load of old toys or books or sticker collections or soft toys. Because she knows EXACTLY what she’s got. And, while we’re on the subject, who bought her it, whether it was for her birthday or Christmas, and how old she was when she got it.

The obsessive side of her personality has come right to the fore. (This is typical for someone with Prader-Willi Syndrome, but let’s face it, no-one can say what her default trainspotter setting would have been, anyway).

And so I find myself packing three boxes of Go-Gos. These are miniature, stylised collectable characters bought by thousands of kids with pocket money to burn on a Saturday. Think Wenlock and Mandeville, the 2012 mascots, only about an inch and a half high.

A risible set of England Go-Gos were brought out in time for the last World Cup. Which means, thanks to my determined girl’s protestations that she “really NEEDS them”, I have just packed 10 tiny identical, plastic Wayne Rooney effigies.

Although these claimed to be a ‘special edition’ series, they did not include any hair-weave representations, or a bonus figure of an elderly prostitute. I feel cheated.


Video is Fountains Of Wayne - Stacy's Mom
Posted by Drakeygirl at 08:16