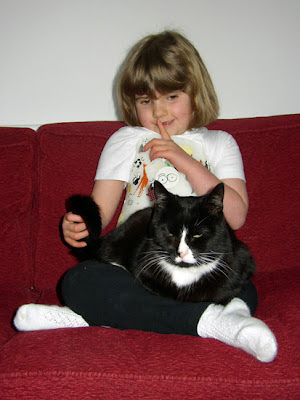 My husband buried Luther Blissett in our garden.

It wasn’t the actual footballer, you understand. That would have been illegal and...well...weird.

No, it was our cat, Luther Blissett, that got interred in a hole and covered up with earth.

The dubiously-monikered moggy - inherited from an unreconstructed Watford fan who had named him after his favourite club striker from the 80s - had been a lovely pet. He was a very patient animal, more akin to a dog than a cat. If you called his name, he’d rouse himself from wherever he was sleeping in the house, and report promptly and dutifully to your lap for a cuddle.

My daughter loved Luther. So when, at an advanced age, he became frail and ill, and we had to have him put down to save him any further suffering, I thought she’d be devastated.

I had a little talk with her, as Luther looked on from his basket, purring. I put on my very serious voice. “Luther is very ill, sweetheart, and Daddy is taking him to the vet’s in a minute. He’s going to have some special medicine that will make him go to sleep forever so he doesn’t hurt any more.”

She looked at me, impassively.  I said: “I think you should give him a stroke and say goodbye.” She shook her head. “No, it’s all right, Mum.” And with that, she hopped off the sofa and went to fetch her reading book.

I’d like to add that this whole conversation took place to the sound of a spade scraping through soil, as in my husband had decided to dig Luther’s grave before he took him to be put down. I was tempted to hold my hands over the doomed cat’s ears, but then decided this would be completely ridiculous.

Fast forward an hour. My husband, hairtrigger gravedigger, returns, and walks back through the house with Luther’s still warm body wrapped up in a rug. Suddenly, my disinterested daughter was FASCINATED. “Mummy, Mummy, can I stroke Luther? Can I touch him? Can I say goodbye?”

I let her do what she wanted. Which was obviously the slightly scary, but somehow thrilling act of touching a dead cat.

She really did love him. I showed her the photo printed at the top of this page (which I hasten to add is a picture taken when Luther was healthy and alive, just in case you were wondering), and she beamed and said: “Oh, Luther was the best cat in the world, wasn’t he?”

But the details, the mechanics, the logistics of his death, didn’t phase her in the slightest.  Neither did me flushing Rocky the newly-deceased shrimp from her aquarium down the toilet a few weeks ago.

Video is Leftfield - Shallow Grave
Posted by Drakeygirl at 08:28