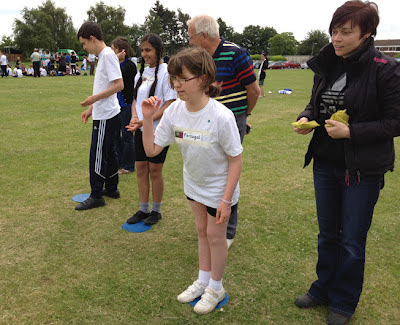 She glanced up from her position and waved, shyly. Her brother was hopping up and down with excitement by the edge of the track.


“RUN FAST, JO-JO, RUN FAST!” he yelled, as the starter’s gun popped. At least that’s what he tried to say, but he has difficulty with the letter ‘f’, so what the other parents may have thought he was yelling was: “RUN ARSED, JO-JO, RUN ARSED!”

To be fair, her running was a little half-arsed. My daughter has never been quick -  the poor muscle-tone from Prader-Willi Syndrome has always ensured this - but she sometimes used to break into a little trot. I’m not sure what’s planted the idea in her head that she shouldn’t go above walking pace, but that’s her current thinking. Perhaps she’s watched a clip from the film Speed and thinks she might explode if she goes over one mile per hour.

It didn’t matter. She was quite happy to partake in the obstacle course, stepping through a hoop, and carrying a ball along in a plastic scoop. She was just going to take her sweet time during the ‘sprinting’ bits in between. And that was perfectly OK.

This was School Sports Day at my daughter’s special school. A slice of luck meant it didn’t rain. Fortuitous timing meant my husband wasn’t on shift, and Nanna & Grandad could come and watch as well, as the date didn’t clash with one of their jaunts with the appallingly-named Probus Club* (*This is not a Prostate Examination Appeciation Society, although it sounds like one. Apparently, it’s something to do with retired PROfessionals and BUSiness people. I’m guessing none of them worked in brand management).

So my daughter had her little team of supporters. We cheered as she ambled up the course, finishing a bit behind her speedier classmates. Then we followed her round the field as she took part in a bit of mini-golf, a not very long-jump, and some rather excellently-executed beanbag throwing.

Some of her schoolmates were being pushed around the field in wheelchairs. Some of the more physically able, bigger lads were somersaulting onto crash mats after bouncing off a trampoline launching pad. The staff were getting stuck in, demonstrating, encouraging, and retrieving wayward footballs.

My girl was in the thick of it, smiling, and joining in. At the end of it she clutched her medal proudly.