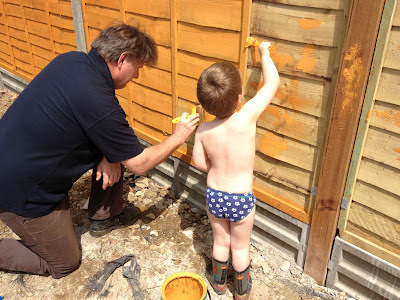 It's all been a bit busy here this week. The builders have now entered the interior of the house, which has meant some nifty shifting about so I can get my work done, keep my boy from sticking his hands in the plaster, and keep my daughter from panicking about the noise.

We've been doing some odd jobs around the place to tidy things up. My husband and son painted the new garden fence, the latter sporting a natty new labourer's uniform (see picture) which I may insist the builders have to adopt next week, just to give me some entertainment.

There is a thin veneer of dust on everything. This is not terribly different to the normal state of affairs here, but at least I've got someone to blame.

Enough cups of tea have been made and drunk to fill an Olympic-sized swimming pool. Refuge has been taken at Nanna's and Grandma's houses. The end is in sight.

My three-year-old wound his Dad up to breaking point last night, and got the Alex Ferguson hairdryer treatment.

I rolled up like an assistant coach, pointing out that it wasn't a good idea to be naughty when you'd been told not to."You've made Daddy lose the plot!"

The young offender looked at his father, quizzically. "Where, Daddy? Where's the plot gone?"

Video is Eminem - Lose Yourself
Posted by Drakeygirl at 08:50