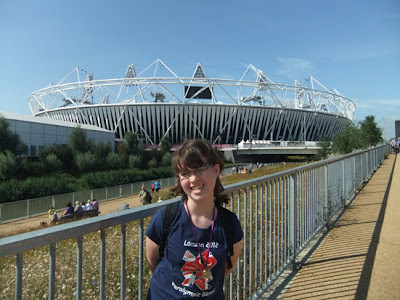 My daughter and I spent a wide-eyed day of wonder at the Olympic Park, watching Paralympic athletes competing in the Olympic Stadium.

My girl, with her poor muscle tone and her tendency to tire easily, climbed three flights of stairs to get to her seat, high up in the gods. And watched four hours of competition.

Her obsessive worries about things being “too noisy” and music being “too loud” were forgotten. She didn't mind the PA system broadcasting snippets of tunes from such varied sorts as Tom Jones, Elastica, and rather surprisingly Joy Division. "It's fine. It's not hurting my ears," she assured me, as we took part in a Mexican soundwave of a cheer rolling round the stadium as it followed the athletes racing around the track. She peppered me with questions, taking it all in, shyly copying the cheers of those around her, her volume rising from an initial whisper to a loud shout.

There were thrills, and literal spills: a Ukranian wheelchair racer tipped over as he crossed the finishing line, then decided to do a one-armed bench press with his chair a few times from his prone position on the track, seemingly just for the hell of it. 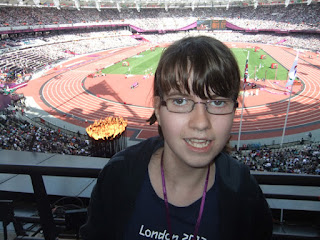 There were medal ceremonies for shot putters and javelin throwers, with the entire crowd cheering stirring anthems from countries all over the world.

Thousands upon thousands of noisy and excited spectators remained impeccably silent (as instructed by the commentator) for the visually impaired long-jumpers, who needed to hear their coach’s voice to determine the direction and duration of their run-up before they hit the board and flew through the air. We did give an appropriately huge roar of approval once they hit the sand, of course, although perhaps the biggest hurrah was aimed at the Chinese long-jumper, who whipped his bright yellow (velcroed?) tracksuit bottoms off with a deliberately theatrical flourish not seen since Bucks Fizz did Making Your Mind Up in the Eurovision Song Contest.

My girl loved it all. Especially the moment a blind runner had an angry stomp around after being disqualified for a false start. “He went before the gun,” I explained, “So he’s not allowed to race now.” She watched as his guide runner tried to calm him down, and get him off the track. “He’s not happy, Mum, is he?” she said, looking solemn, but thrilled by the drama, then adding: “He’s having a proper tantrum!!”

The shimmering Olympic flame, housed in that elegant cauldron, was right below us, some distance down, in a lower tier. My girl’s face seemed to me to be giving off a similarly golden glow.

Tactical snacks kept her happy until lunchtime, when, unbelievably, she voted for us to stay and watch the last hour rather than nip out for dinner and come back.

“I’m hungry, but I want to see it all.” That right, there, is the supreme ringing endorsement for an event from a child with Prader-Willi Syndrome and an insatiable appetite - an event so good you’ll put your dinner on hold for it.

Of course, we hit McDonald's (as she'd made me promise) as soon as the session finished. The dreaded Maccy D's is a special treat, but not as calorific as it sounds, as she has chicken nuggets and a fruit bag instead of chips.  We sat on a park bench in the blazing sunshine chatting to yet another friendly family - one of scores of similar sociable encounters with strangers throughout the day.

We walked a lot. We talked a lot. She clutched her programme to her chest and had a nap on the final train leg of our journey home.

That evening, she hit her pillow with a thump, worn out but happy. I shut my daughter’s bedroom door, and as I turned and walked down the stairs, I heard her call out.

I smiled to myself, and called back that she had better get some sleep then. I received a muffled giggle in reply.

A day that ends on a giggle is a good ’un. This was more than good. It was spectacular, and I don't think we'll ever forget it.

A huge thank you to Martin Simmonds (@martsimmonds) and his lovely family for kindly putting us up the night before and saving us having to catch an unfeasibly early train.