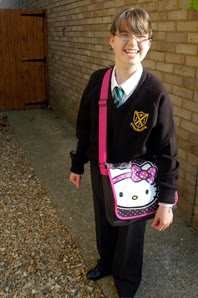 My daughter started at the local comprehensive school today: a big, imposing, building with 1300 pupils in it. It would have been a daunting enough day for any other 13-year-old. But for a girl with special needs, in amongst a sea of ‘mainstream’ students, it was a bit of a leap of faith.

I held her hand and walked alongside her, through the crowds of bleary-eyed teenagers, many still in British Summmer Holiday Time, their bodies in shock at having to get up before noon.

I was, of course, the only mum doing this, which felt really odd compared to the motley bunch of us that used to turn up with our offspring at the doors of her old special school. My daughter, thankfully, was oblivious to this fact.

Mainstream didn’t work for my girl after the age of about seven. She was lost in a sea of pupils that were quicker than her at almost everything. When we recognised it wasn't working, we moved her to a special school, where the teaching was done in small, well-staffed groups. And she's been in a special school environment ever since, where she’s thrived.

Yet now, here we were, walking into a mainstream secondary. Had we done the right thing?

Well, things aren’t quite how I’ve made them seem. Despite being decked out smartly in the mainstream school’s uniform, really she is still part of her old special school, and is being taught in a small, specialist, tightly-supported ‘satellite’ class. Although the unit is part of the widespread policy of ‘inclusion’, it’s actually pretty self-contained. To all intents and purposes, it is a miniature special school with just six pupils in her class, supervised by one teacher and two teaching assistants, who also accompany the group at break and dinner times, keeping a watchful eye on them when they come out of the safe cocoon of their own little learning world.

So we have taken the plunge, and this morning, for the first time, I took a deep breath, gave my daughter her last few words of encouragement as her teacher met her at the gate, and watched her disappear inside. In her smart jumper and tie, clutching her Hello Kitty bag, she somehow looked incredibly tough and grown-up but incredibly young and vulnerable all at the same time. Then I took Dennis The Menace to nursery on his scooter. Then I went home to worry.

Just under seven hours later, I picked her up, trying not to inhale the exhaust fumes of the school buses, and squeezing past the lanky, bumfluff-lipped sixthformers, leaning casually on their mopeds. 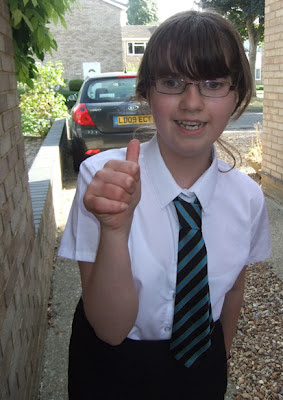 How had she found the day? How had she coped (particularly when, although closely supervised, her little group of ‘different’ classmates would have come into contact with the wider school cohort)?

She walked towards me, chatting to her teacher, her hair swept up into a glamorous pony-tail that put my morning's amateur scrunchie-grappling to shame.

I smiled, thinking how nice it was that her cousin, without any prompting from me, had taken it upon herself to seek out my girl.

“So what did you think to it?” I asked, searching my daughter’s face for clues to her mood.

“I’ve not made my mind up yet,” she informed me. “But I think today gets a thumbs up.”