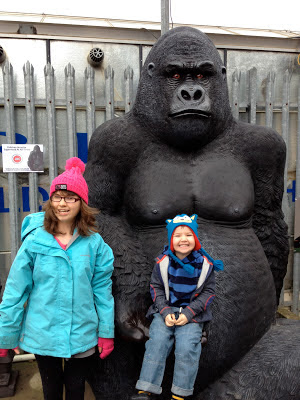 Damien is dead. We flushed him down the toilet. My daughter announced solemnly that Kitty, Damien’s 'wife', had kissed him just before we scooped him out of the tank with a net. “It was like she was saying goodbye...” she explained. If she’d have had a violin, she’d have started playing it.

We bought the fishtank for her birthday last year, and she loved it. As the months have passed, however, it's plummeted down her popularity chart. (She even recently expressed a desire to put it on ebay to make room for a doll's house).

It intrigues me that the smoking embers of her fishy interest have been rekindled into fiery fascination by Damien’s dramatic death. I say ‘dramatic’, but ‘drifty’ or ‘floaty’ would be more applicable.

So having rediscovered fish-love, my girl asked if we could head to our nearby aquatic superstore to get a Damien II. I giggle every time I think of this new fishy fellow’s Omen-like name. I’m resisting the temptation to magic marker 666 on his side and add a hanging nanny ornament to the aquarium.

Damien II came with a female companion (both of them a variety of fish called dwarf gouramis). So far, they are settling in well with Damien’s widow. The man who sold them to us assured us that two females and a male are a good combination. My husband nodded, dreamily, and I kicked him.

Did I mention that the aquatic superstore does really live up to the 'superstore' part of its name? In fact, I’d call it an amazeostore, purely and simply for the fact that it has a random, giant creatue by its entrance. A shark, you might think. A manta ray? An octopus? A goldfish?