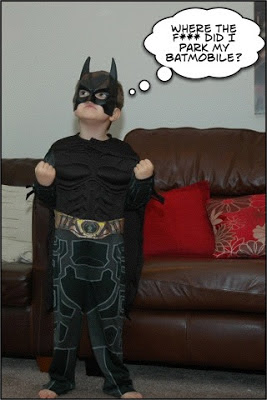 I told my husband last night if he buys me a 'onesie' for Christmas, I'm divorcing him.

He then wondered out loud if there were any ‘joint onesies’. “There probably are," he replied to himself. "They're probably called 'twosies'. Can you get different ‘joins’? Like where you share the head hole? Or perhaps you’re joined at the hip?”

This put a twinkle in my eye. “I think you might be looking at the ‘specialist’ market there,” I surmised. “I imagine they’re probably joined at the ‘groinsies’.”

We ended the night with a giggle, which was an appropriate way to round off a day that had glowed from start to finish.

It was our son’s 4th birthday. He dressed as Batman, played with toy knights, got a NERF gun his hands were too small to fire, but got round the fact by stripping to his pants, running around the house, and asking his sister to shoot him. She really liked this game.

The Boy Wonder had a party for his pals from nursery at a little kids café.  This place has the honour of being so small, friendly and well-run that it is the only soft play area premises I can enter without losing the will to live.

Parties always need a little bit of extra planning when you have a child with Prader-Willi Syndrome. A quick word in advance and a food handover before festivities began ensured that my daughter was presented with a plate containing low-fat substitutes for the cake and ice-cream her brother and his friends were allowed, but she wasn’t.

My girl, aged 14, thought long and hard about whether she wanted to sit at the party table with the four year olds, or at the next table with the adults.

“I’ll sit here, Mum,” she said, sliding into the seat next to me, unpacking the bag containing her Helly Kitty notepad, Hello Kitty pencilcase, and Jessie J biography. Yes, yes, I know what I said about this latter monstrosity a while ago, but she had a) been armed with a good working knowledge of the Amazon website, b) had saved up her pocket money, and c) had displayed a persistence you just wouldn’t believe.

When her brother gave out the party bags at the end, she was given the job of handing out balloons. We made a fuss of her for being so grown-up and helping look after the little ones. Her chest puffed out with pride. Mine did too, or that might have been my new bra.

Today is my birthday. I didn’t feel like I needed any presents: they kind of all came yesterday.*

If you are planning to deliver any presents today, please note this last sentence is meant in a purely figurative sense.