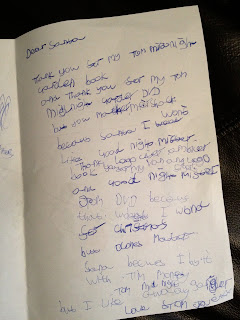 There was a slight mix-up on Christmas morning. I can’t understand how it happened. A couple of Santa’s presents were wrong.

My daughter has a theory: she thinks The Big Man “went to Tesco and didn’t write it down right on his shopping list”.

Luckily, it didn’t upset her. A teenager with Prader-Willi Syndrome can magnify small, unexpected problems into huge, overwhelming ones, but in this case this didn’t happen.

She’s just written this letter to Mr Claus. And it’s pretty reasonable, although I do detect an undercurrent of passive aggressive disapproval.

For some reason, when reading this, I feel as though it has an unwritten ending of:
“P.S. So stick that up your chimney, you stupid bastard.”  But maybe that’s just me.

Song is Otis Redding - Everybody Makes A Mistake