My daughter now sports some more metalwork to go with the titanium rods in her spine: a set of disco pink braces adorning her top set of gnashers.

The fitting went smoothly. My girl was biddable and compliant, despite a ragged couple of nights' sleep. The orthodontist and dental nurse were like a Formula One pitstop team, working swiftly and efficiently to fit, adjust and tighten, then wave her off. (They didn't actually have flags).

Before the appointment, I’d tied her hair in two bunches at the sides rather than her current preference for a ponytail at the back, thinking it might be more comfortable for her as she lay on the dentist’s chair whilst her braces were fitted. 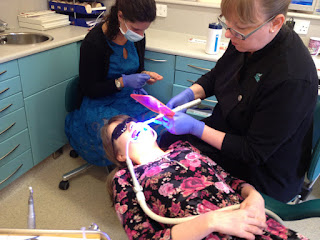 So as I helped her up, and she gave me a big smile to show off her new fretwork, a thought suddenly popped into my head: she looked like the love child of James Bond’s steel-toothed enemy Jaws and his diminutive be-pigtailed girlfriend Dolly, in Moonraker.

We’ve had a ropey couple of days since. The braces obviously feel odd, and although she’s been insisting - with monotonous regularity - that she likes them, my girl has struggled with how they feel inside her mouth.

My efforts to tell her to try to eat normally, close her mouth more so she doesn’t dribble, and not to stick her fingers in her gob and fiddle, have had to be repeated over and over again, sometimes with me holding the sides of her face and telling her to look at me as I try to hold her darting, flitting gaze for just a few seconds so she can listen.

I realised too that her habit of wringing her hands together right up against her face with her head leaning slightly forward means she is actually pressing her mouth against the metalwork inside, which is going to cause some soreness and bleeding if we don’t keep on top of it. We need to try to ensure she has something in her hands she can tinker with, and displace the movement to a safer position.

Then there’s the cleaning, a process for which the word palaver seems to have been invented. Removing the gubbins stuck behind the wire and metal joints is no mean feat. We are now armed with a special toothbrush, a tiny wire brush thingy to poke under and around the hard-to-reach bits, and instructions on swilling, rinsing, and spitting. At the moment I’m having to do the mushed-up food removing duties, as in her insomniac space cadet mode, she’s too jittery and distracted to even attempt it. When she finally gets some sleep, and I give her a few lessons, we’ll see if she has the dexterity and concentration to manage it. (Close supervision is, I’m sure, going to be needed).

She needs a little time. She needs to get used to it. Then in six weeks, she’s getting another set for her bottom row of teeth.