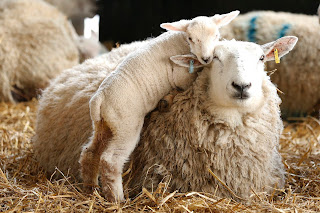 My daughter’s voice sometimes carries a long way. Some of her statements seem perfectly timed to ring out and shatter those odd occasional moments of silence in a conversation or a crowd.

Visitors to a local open farm were treated to one such tip-top declaration this week, relayed to me by the mum of PWSBFF (Prader-Willi Syndrome Best Friend Forever), who took the two girls there for the afternoon.

A crowd was gathered around a sheep which was giving birth. When the lamb’s head had been hanging out for quite some time, staff called for the farmer chap to come and help move things along.

The girls stood, fascinated, as the man rolled up his sleeve and did a James Herriot, rooting about to release the lamb, who plopped out onto the hay.

The commentary went as follows:

PWSBFF (disconcerted): “Mum - that’s the man who was helping in the café and he’s just stuck his arm up that sheep’s bottom. It’ll have poo all over it!”


My daughter (her voice amplified off the walls of the pen and booming out like a tannoy message for the hoards of wide-eyed small children): “No, no, no, I’ll think you’ll find he’s gone right up her vagina.”

Song is Lady Lamb The Beekeeper - Bird Balloons
Posted by Drakeygirl at 21:21