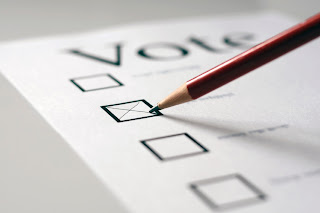 Today, I took my 18-year-old daughter down to the polling station to cast her first ever vote. I’m happy, proud, and a little bit teary.

Yes, the smile will be wiped off my mug tomorrow, when we know the result of the UK General Election (or as I like to call it, another demonstration of the average British voter’s inexplicable desire to shoot themselves in the foot, repeatedly).

Like the morning after the Brexit vote, I’ll be feeling so utterly out of step with an insane world that I will most likely be out running at some ridiculous hour (I might as well do a physical version of my emotional huffing and puffing).

I did the responsible thing. Taking into account my girl’s learning difficulties, I tried to give her a simplified guide to each party's policies. And I did try to disguise my own preferences, honestly, m’lud.

She’s watched the Newsround special. She’s talked about it in school (and told me that one of her teaching staff will definitely be voting for the ‘craps’. After some discussion, I realised she meant ‘crats’ as a diminutive of the Liberal Democrats, which came as something of a relief).

She chose ‘the red ones’. “Because of more money for the hospitals, and Grandad is in hospital, isn’t he?”

I explained how she would have to tell the polling station staff her name and address, take the ballot paper into the booth, put one cross next to the name of the person from the party she had chosen, fold it up, and post it in the special box. (I broke this down into each step, obviously, as otherwise she would have been lost at “name”).

And we did it. She tentatively walked to the voting booth, and took an age to read everything on the paper and find where she needed to mark. Then she walked, uncertainly, over to the ballot box, where the chap showed her where to post her slip. I watched all of this, standing a few yards back by the door, having already cast my vote. In the meantime, I’d had a little chat to my eight-year-old son about the process, and explained how important it was to vote, and how some people had died in order to give everyone the right to choose the people who ran things.

“Why don’t they use computers instead of bits of paper?” he asked.

“Well, when you have computers, you might get hackers,” I said.

“Yeah, but you could get burglars stealing the box,” he replied, looking thoughtfully at the windows and doors, possibly checking for ease of unauthorised entry.

“Blimey, are you planning to hijack the election yourself? You’ll get locked up, you know.”

The polling station staff had overheard us, and were smiling.

As I ushered him and his sister out of the polling station, my boy was still pontificating.

“No. I’m not going to steal the box, Mum. But I think I know who will win, anyway. They’re called the Conservatories. They’re a bit like that baddie, Trump, aren’t they? He’s horrible.” Then he winked, put on an American drawl, and added: “And they WILL BUILD A WALL.”

Song is The Move - Vote For Me
Posted by Drakeygirl at 20:45