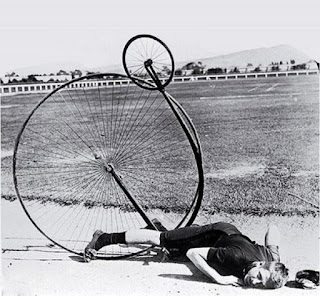 We took a birthday cake to my mum-in-law in the old folks' home today. I lit the number candles, and she gave me an admonishing stare. She simply refused to accept she was 87: "Don't be ridiculous - I'm not that old."

We handed over cards and pressies from members of the family from further afield who couldn’t be there (although it’s a little sad each year to see the pile diminish due to the simple fact that she’s outliving most of her contemporaries).

She liked the card my daughter gave to her. My girl had bought it last Saturday when she’d been out shopping with a carer, practising independent skills. Independently, she’d thought of Grandma’s birthday, and independently, she’d chosen a card. The carer raised her eyebrow at me when they arrived back, as my daughter showed me what she’d chosen. It was a photo of two women in Victorian clothing, riding penny-farthings. The speech bubble next the the first read: “I’ve never come this way before.” The second said: “It’s the cobblestones, Patricia.”

“It’s a jokey card, Mummy. Do you think Grandma will get it?”, my daughter asked, the beautifully innocent look on her face illustrating how far over her own head the joke had sailed.

Grandma, bless her 87-year-old cotton socks (the socks are  about a month old, because we did an M & S stock-up in May, but you know what I mean), actually thought the woman was saying she’d never come home this way before, which de-escalated the smut somewhat. Which was probably just as well.

As much as I like a double entendre, hell, single ones, too, it would be a bit weird, joking about orgasms with my Mum-in-law (who was my primary school teacher when I was six, which is weird enough anyway), whilst sitting next to my other half, her son, whose most vital role in life (and I’ll fight anyone who says it isn’t) is to have a cobblestone effect on me.