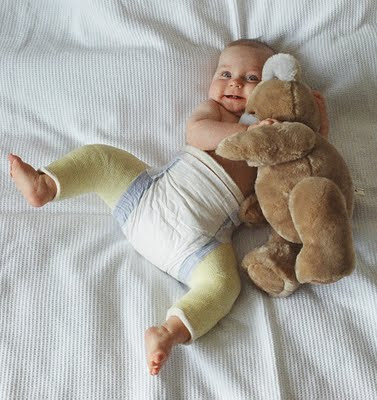 Today's blog is a special guest post by Katy G:


When my daughter was born she had a hip problem. When we received her diagnosis and year-long treatment plan we were knocked for six. The ancient, grim-faced doctor gleefully called the traction cot in which she was interred for a month 'The Gallows'. I read an article in some shit magazine at the dentists with the headline: 'Doctors Hung My Baby Upside Down to Fix Her'. I read awful stuff on the web about the sores and stench that would result from her nipples to ankles plaster cast. If I had found your blog I would have been in heaven! My husband and I too joked about having T-shirts made for her (see blog entry Gillian). Ours were going to say: 'My Dad Chucked me Down the Stairs' or: 'I Fell Off My Motorbike' because we got fed up of the whispering in the supermarket, and the: "Oh, the poor little thing!"s.
The rays of sunshine were few and far between, but I remember each and every one vividly. The man who glanced at us in the bank queue, did the classic shocked double-take, but instead of following up with sympathy, stuck his tongue out her. The amazingly camp bloke working in the clothes shop who threw his hands up on clocking us and squealed "Ooooh! Look at you! Doing a star jump!"
After a week of my daughter in traction in hospital in her special cot (flat on her back, legs in the air, held up with ropes, never let out, or allowed to change position) we were allowed to bring her home, with the cot so she could carry on her traction in the middle of our sitting room. We slept next to her, on the floor, with a stout pair of scissors to hand in case she choked and we had to cut her free. So that was relaxing. Anyway, one day we had friends round, and it seemed rude to exclude her, so we sat on the floor around the contraption containing the perfectly cheerful strung-up-baby, drinking and chatting happily. A man knocked on the door collecting for charity. I was slightly jolly, with a beer in hand, and asked him in, while I found some cash. I didn't expect him to follow me into the sitting room. When he walked through the door he saw a bunch of youngish adults clutching cans of Stella, sitting laughing in a circle around a baby tied up in a weird, metal frame. He looked utterly shaken and appalled. I still can't think of that without giggling. And feeling slightly guilty for ruining his day.

Video is The Swinging Blue Jeans - The Hippy Hippy Shake
You can follow Katy on Twitter at @ksg123, or on the Word Magazine blog (username: katyg). Or on the Westmount Music blog.
Posted by Drakeygirl at 08:24