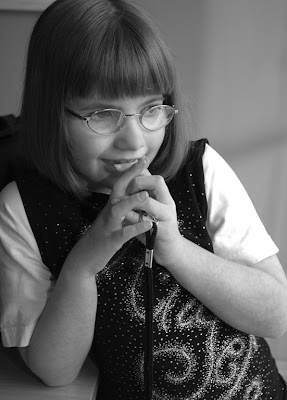 
My daughter ALWAYS has a whistle. (And, just to be safe, I always have a spare one in my handbag).


It serves a very useful purpose: it keeps her hands busy. Without something to fiddle with, she’d be displaying some of the traits she shares with some other people with Prader-Willi Syndrome - obsessive compulsive type behaviour like rubbing her gums, picking her nose, sticking her fingers in her ears, or picking any insect bite or tiny cut in the skin.


So instead, she fiddles. Everyone who knows her is used to her tinkle. You can hear her coming, like a cat with a collar on its bell.


Once, my daughter and her well-known whistle even saved the day at a kids’ football match. We’ve gone to watch my friend’s sons play at the local ground on a Saturday morning, and rolled up a few minutes late, wondering why the game hadn’t already started.


There, looking stressed out, was my mate’s husband, Fraser. Who was about to abandon the game before it had begun because although they had a ref, they had no referee’s whistle.


I believe he was actually in the middle of the phrase: “Where on earth are we going to get a....” when he broke into a huge grin as he spotted my girl ambling across the field towards him, absent-mindedly fiddling, as usual, with the whistle that was slung around her neck.


Video is The Beatles - Two Of Us (It was either going to be John Lennon or Roger Whittaker whistling. Lennon won).
Posted by Drakeygirl at 08:38