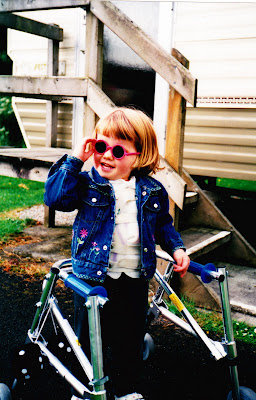 It was a backwards Zimmer frame on wheels.

It was latest in a series of contraptions to help my daughter achieve physical feats other children managed with ease (see previous blog entry Cricket).

Called a 'rollator', which sounded like something you'd cut your lawn with, it was actually an open-fronted frame which provided enough support to enable my three-and-a-half-year-old daughter to walk.

What it also did was act as a big fat flag to anyone who saw her, teetering along painfully slowly, that this child had something wrong with them. It also marked her out to the other children in her playgroup as different.

So, we decided to add something else to the equation. We would make it an object of envy, not pity.  A trip to Halfords, and a few minutes work with a screwdriver and the frame had some custom additions: a drinks holder and flask, a shiny new bike bell, and last but not least, some furry dice.

Yes, we pimped her ride.

"Well, I'm not braggin' babe, so don't put me down
But I've got the fastest set of wheels in town
When something comes up to me he don't even try
'Cause if I had a set of wings, man I know she could fly"
- The Beach Boys - Little Deuce Coupe