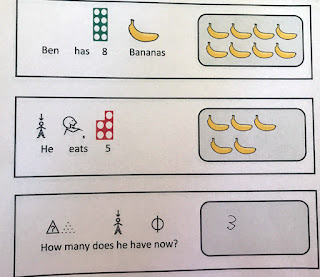 The last attempt to help my daughter with college maths work saw me not only reach the end of my tether but run screaming towards the distant horizon with it looped by a single strand around my ankle.

Today we returned to the subject.

This was, obviously, only after I'd cleared my head of the Post Traumatic Maths Disorder flashbacks of my girl simply refusing to tell me a Rubik's cube was called a Rubik's cube just to make the point that she definitely didn't know the names of 3D shapes, including the ones she did. 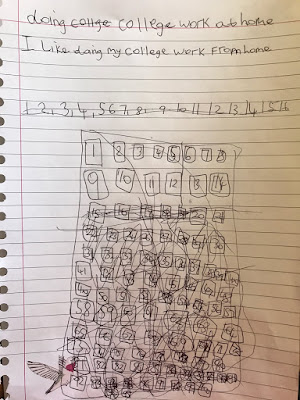 So in my capacity as Headteacher, Adminstrator, and ‘Specialist In Every Subject Once I’ve Googled The Answer’ at the laughably chaotic home education unit formerly known as my home, I tried something new with her: the hands-off approach.

In general, my daydreamy girl needs prompting to complete tasks. When it comes to maths, there's the added difficulty of her stubbornly announcing over and over again that ‘this is not my strong point’ as she decides she cannot do a task before she has even looked at it.

So I presented her with a fait accompli, deliberately printing off an easier exercise from the college website, telling her she was perfectly capable of completing it without help, and leaving her to it.

I’d love to add that I then retired to the garden for a mojito, cigar, and an intimate massage from my live-in Cuban pool boy, but this did not happen, as I’ve had to furlough Miguel, because there’s only so many staff you can keep on in these difficult times. So instead, in...you know...the actual real world, I grabbed a cuppa and transferred my attention to my son's schooling, the highlight of which was us looking at our garden as a microhabitat, and him asking me if the empty beer bottles spilling out of our recyclying bin counted as part of the ecosystem. The cheeky git.

More than an hour later, my daughter announced she had finished. The handful of questions (involving counting and comparing the amounts of different items of fruit) had taken a loooooong time, partly because she had obviously been grappling with her ‘can’t do maths’ blinkers, and partly because she’d decided to hand-write a 100 number grid to help her add up sums like 6 plus 4. (If you look at the picture, you’ll see she must at some point have realised she didn’t need to go all the way to 100, and scribbled out all the numbers above 14).

But she did it. I don’t care that she’s 21, and the questions were easy enough for a very young child. She did it. And I discovered that sometimes the best method of teaching her is not to.

As part of the 2.6 Challenge (which is asking people to fundraise and donate towards small charities that are threatened with closure because of the effects of the Covid-19 crisis) I'm currently writing 26 blogs in 26 days.The PWSA UK is a charity which is absolutely vital for people with PWS, their families, carers and professionals who work with them. Without urgent help, PWSA UK will fold. This charity saves lives and for some people makes lives worth living. If you can, please go to my Just Giving page. Thanks to every one of you who has donated 2.6 bananas, or 26 bananas, or any other amount of fruit. Please give money next time, though, yeah?