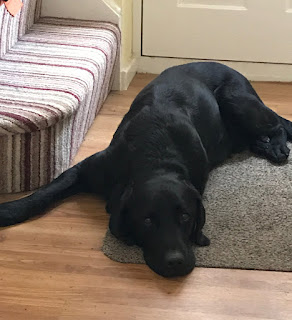 I have discussed my daughter’s fascistic tendencies before. I am convinced if we lived in different times that her love of rules would have seen her indocrinated into the Hitler Youth in a flash. There’s little doubt she would have sold me and her dad down the river, the little Nazi.

We have a labrador. A patient, well-behaved, 11-year-old labrador. He’s only lived with us for nine months, but he’s part of the family.

If my daughter hears the cupboard being opened and the rustle of the snack packet (which she can do from several rooms away), her accusatory voice rings out: “Jazz is NOT allowed a treat today. He WILL NOT get overweight.”

People with Prader-Willi Syndrome have to have their food intake strictly controlled, to prevent them becoming morbidly obese. Their bodies don’t convert fat to muscle efficiently, so have to be on less calories than average, which is especially challenging as they never physically feel full up.

I think my PWS daughter, whose own mealtime and snack regime is so rigid, is enjoying being in control. She has no real agency over her food, so she’s channelling her inner frustration to take a controlling interest in the dog’s diet.

Today, Jazz, being a labrador, rebelled. At lunchtime, my son had a slice of bread cut up into soldiers sitting next to his soup bowl - a little too close to the edge of the table. The dog spotted his chance, and snaffled a finger of bread.

“It’s just not good enough. You will be banned from the house for a day for this behaviour,” my girl informed him.

Song is The Fall - Who Makes The Nazis?

As part of the 2.6 Challenge (which is asking people to fundraise and donate towards small charities that are threatened with closure because of the effects of the Covid-19 crisis) I'm currently writing 26 blogs in 26 days.The PWSA UK is a charity which is absolutely vital for people with PWS, their families, carers and professionals who work with them. Without urgent help, PWSA UK will fold. This charity saves lives and for some people makes lives worth living. If you can, please go to my Just Giving page and donate anything you can spare - a few pence or a few pounds, it all counts. If you don't do it, my daughter might report you to the SS or something. A huge thank you to the anonymous donor who I'm half convinced might have made a mistake with the amount yesterday. Get in touch if this is the case!
Posted by Drakeygirl at 16:54