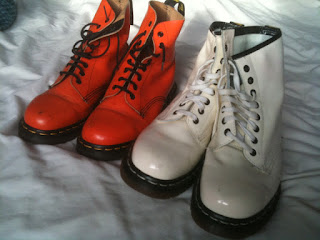 Thirty quid. I had no idea kids' shoes were thirty quid a pop.


My daughter couldn’t walk until she was three and a half. We attended hospital appointments galore, and had to use leg splints and other contraptions and get her to do various physio sessions, and all the while, the hospital were supplying the footwear.


To be fair, the boots were pretty cool.


I’m sure, in years gone by, NHS orthotic boots were clumpy black monstrosities. Hers weren’t. They were supportive, round the ankle, yes, but they didn’t look like miniature Frankenstein’s monster shoes. They were suede, with little cats on the side. Her first pair were red, her second were blue.


(Admittedly, I might be biased when it comes to boots. Have a look at some of mine in the photo, above: the orange pair were my favourite in my teens; the cream ones, of course, were my wedding shoes).


When the time finally came and my daughter didn’t need specialised hospital boots, I headed into Clarks. Picked a nice, dainty, little, flowery pair of shoes.


And nearly fainted when I got to the till.

Video is Nancy Sinatra - These Boots Are Made For Walking
Posted by Drakeygirl at 08:28