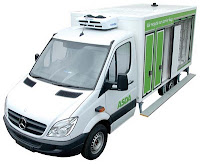 My daughter’s face was stricken.


I could see the panic starting in her toes and rising up through her body. I needed to stop it before it reached her head, at which time there would be NO REASONING WITH HER.


“It’s OK, we can sort it out. It’s not a problem. Everything will be fine. Don’t worry. Listen to what I’m saying: it’s all fine. It’s all right,” I insisted, trying to keep my voice firm, and get her to actually listen to what I was saying.


So what had happened to put her in a tailspin?


The Asda delivery truck had been. We were on a tight timescale to have Sunday roast ready in time, and they’d missed one vital item from our order: the chicken.


You need to understand how DISASTROUS this is. It’s why I don’t often order groceries online. Meals have to be precision-planned and to happen at set times in our household - it’s part of the regime needed to keep our hungry daughter happy and calm. There is no margin for error.


“Listen, listen. I ordered chicken breasts too, and they've brought them, so we can have those instead of the roast chicken,” I told my worried girl.


I had to repeat this four or five times before she accepted it. But she wasn’t happy. The menu and method had changed. Food that had been promised had not been delivered.


And so, despite tucking in to a good, hearty meal, with breast fillets instead of roast chicken, (but piled up, as usual, with plenty of veg), we had the full scale “I’m so hungry!” routine in the evening. It doesn’t happen too often. But the minor mishap had lodged in her brain and food was all she could think of.


So, I’d just like to send a message to the very polite and friendly delivery driver, who whistled a jaunty little tune as he sauntered back to his lorry.


Video is Alan Partridge - Knowing Me, Knowing Yule clip. It's not actually a chicken, but it's how I felt.


Video is The Smiths - Panic
Posted by Drakeygirl at 07:56