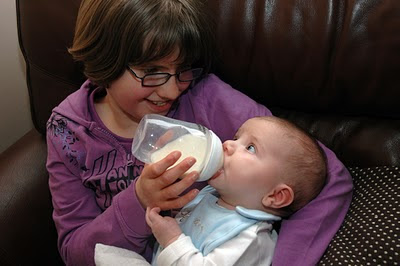 My daughter wanted a baby brother or sister. Desperately. This was no reason to give her one, though. I mean, she also yearned for a Barney The Dinosaur, and there was no way she was having one of those b*stards.


But we wanted another baby just as badly. Which meant things were very difficult when we lost some along the way.


Eventually, despite the battle-scars my body gained in the trying, 10 years after we gave birth to our daughter, we cooked up a baby brother for her.


At nine weeks I had some bleeding and was sure I’d lost this baby like the others. That was it - I’d had enough of sitting in the Early Pregnancy Unit, having gel rubbed on my belly and being shown a scan that was missing the tiny, vital, throbbing heartbeat of life. A previous ruptured ectopic pregnancy had robbed me of one of my inner tubes. I couldn’t use a puncture repair kit to fix this. If this baby was gone, that was it. No more.


But the little bugger was there. Clinging on, stubbornly.  The shock of the good news surged through me and from that moment on I knew it would be OK.


This photo is the moment I knew she’d accept this. It was my son’s second ever bottle of formula milk, after I’d given up breastfeeding when my portable, personal, dairy delivery system failed to keep up with its customer’s requirements. (I didn’t let her give the first bottle - I thought it wise to do a test run when she was at school).


“He has to have full fat milk, doesn’t he, Mum?” my daughter asked me. ‘Not skimmed, like me. I’m not allowed full fat.”
“That’s right. Babies need it to grow big and strong.” I said.
She considered this for a moment, and nodded.
“Good. We won’t use up all mine, then.”

Video is Sister Sledge - We Are Family. Yes, yes, I know it says: 'I've got all my sisters and me', but it's the general sentiment I'm going for, all right?
Posted by Drakeygirl at 08:18