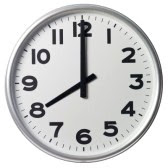 I am defying Time. I am laughing in Time’s face. I am cocking a snook at Time. I can manipulate Time. I am a Time Lord.


You cannot and will not blame me for this.


I made a bit of a misjudgement back in September, when my daughter started her new school after we moved house. Previously, she had to get up at 6.45am to be ready in time for the Happy Bus to pick her up. It was an early start because she was furthest away and therefore first on and last off.


Here, in our new home, we live just half a mile away from her new school. So she gets a little lie in.


I worked out that 8am would be the perfect time for her to get up and do what she has to do: laboriously make her cereal ‘mix-up’ and a slice of toast, clean her teeth, get dressed at snail’s pace and stroll the short distance with me to school. Factored into this is her little brother’s zig zag route on his scooter and tendency to stop to throw stones in every puddle and drain.


I was wrong. This is the perfect time only when my husband is also here, giving us two pairs of hands wrangling the wayward kids. When his work shifts mean it’s just me, it falls short. By about 15 minutes.


I explained this to my daughter, and suggested she needed to get up a quarter of an hour earlier.


She wasn’t having it. “No. You said 8 o’clock. I get an extra hour in bed, you said. I want to get up at 8 o’clock.” Her heels were not so much dug in as concreted.
I tried to explain that 8 o’clock had been giving her an extra hour and a quarter in bed, and the new getting-up time would still give her an hour. But she’s not that great at half hours or quarter hours. She had picked and mixed her analogue and digital times in a combination that had bamboozled her. She couldn’t understand and refused to believe that 7.45 is an hour later than quarter to seven. She wanted that hour, and she didn’t think she was still getting it.


Now, I get up, turn forward the hands on the kitchen clock by 15 minutes, and lie about the time.

Video is Gillian Welch - Revelator
Posted by Drakeygirl at 07:53