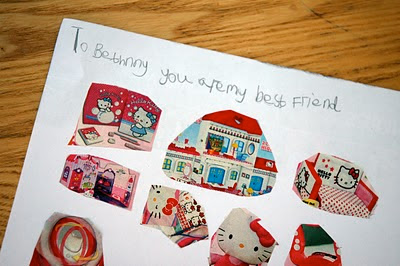 Making friends is something kids are really good at. It’s something they learn instinctively.

If you watch a bunch of children who don’t know eachother start to play together, you can see it happening naturally. Small tots will briefly check eachother out, and think: "You’re about the same size as me, let’s chase". Or in the case of my psycho son: "You're slightly smaller than me, I'm going to hit you", but he's not really a very good example.


Making friends when you’re a bit bigger needs a few more skills. You’ve got to be able to gauge how the other person is feeling. Ask them something about themselves and listen to what they tell you. Share some of your experiences with them. Be kind. Notice subtle facial signals and voice inflections.


My daughter has always struggled with this. When she was tiny, she played along with others. But the older she got, the more she always seemed to be on the periphery. Particularly in large groups of children. She didn’t really understand how it all worked. She’d be at the edge of the playground, watching, or sitting on a bench, her head down, chatting to herself.  At parties, she’d dance on her own. She’s always existed in her own personal bubble, cushioned and separate. It didn’t seem to upset her, overly. It was just her. The way she was. I often found it hard to watch.


But recently, she’s begun to get it. At special schools, they work hard on improving children’s social skills, and teaching them how to relate to one another. And I think, at long last, some of it is sinking in.


This week, she’s made a friend.


She told me all about Bethany, who she’s met at her new school, and bonded with over a shared love of Animal Hospital toys. She's talked about her pretty much non-stop, and also spent two evenings making numerous invitations for her to come to tea. This was all off her own bat. I was only there to help when it came to one question, the poignancy of which escaped her, but hit me, full-on.


I bumped into Bethany’s mum at the school gate and I told her how unusual it was for my girl to take the initiative, and how great it was that they were getting on so well.


Behind us, my loner daughter and her new friend were ambling along, deep in conversation, chatting away like old war buddies.


Bethany is coming to tea at our house on Thursday. This makes me quite extraordinarily happy.


Video is Flight Of The Conchords - Friends
Posted by Drakeygirl at 08:18