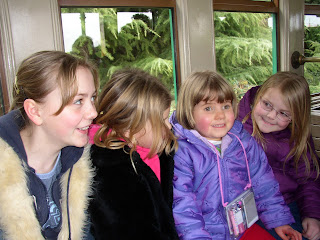 When my daughter was four, we travelled, en masse, as a family, and we ‘did’ Eurodisney.


We were just like any other family. Sixteen of us. A smattering of surly teenagers, a handful of ecstatic toddlers, a couple of proud-as-punch grandparents, and a few harrassed parents.


My girl was wide-eyed, rosy-cheeked, and excited (See picture. She's the most wide-eyed one with the rosiest cheeks). She’d only been walking for four months, thanks to her weak muscle-tone. It was March, it was sunny and crisply cold, so she was wrapped up tight in her scarf and gloves and hat, riding along like royalty in her outsize buggy.


We’d smuggled in a healthy packed lunch for her, despite the signs warning that you weren’t allowed to bring your own food. (As we suspected, there weren’t any options that didn’t consist of lard-filled fast-food products and chips).


And we’d popped into the customer service hut, and secured a ‘disabled’ pass for her, which I immediately began referring to as ‘The Golden Ticket’ as it allowed us to jump the queue, enter rides through the exit gate, and get on board rides pretty much instantaneously. Oh yes.


So she tried her first ever rollercoaster.


The lights went off, we rolled forward and plummeted what must only have been a few feet, but felt like a few hundred.


Next to me, in the pitch black, she was completely silent. I had no idea whether she was terrified or struck dumb with happiness.


It turned out to be the latter. As we burst through the doors and hit the sunshine, travelling up in a big arc, I saw her face in the light for the first time. She was smiling the widest smile I’d ever seen. It was the beginning of a proper love affair with rollercoasters and rides.


But, through no fault of her own, it didn't last.


Three years ago, my daughter had spinal fusion surgery, which meant she no longer had to wear the rigid body casts she’d been encased in all her life. This was momentous, like a prisoner being unchained. We could hug her soft body instead of her plastic armour. She was free and it was a joy.


But it did have one downside. She's not allowed to ride a rollercoaster ever again.


Video is Everything But The Girl - Rollercoaster
Posted by Drakeygirl at 08:16