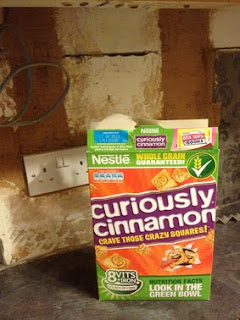 It's been a manic week. Working from home is all well and good - except when you're having your house rewired, I have discovered.

Me and my Mac are covered in a thin layer of dust and a large aura of frazzle.

Martin, the sparky, has had an interesting taste of our family life, which seems mainly to have consisted of us shouting at the toddler.

My daughter - the one with Prader-Willi Syndrome, the one who likes her life to be nice and orderly, and the one who doesn't like change or a break in routine - has been remarkably calm about her floorboards being pulled up and hundreds of metres of wires being pulled here there and everywhere, like a melted game of Kerplunk!.

But tonight, in amongst the mayhem of getting work finished, getting tea done, and stopping the two-year-old either electrocuting himself or going caving inside our walls, my daughter did something that worried me.

I caught her wandering round the corner, looking mightily guilty, with her mouth clamped shut.

"What are you eating?" I asked. Panic crossed her face. "Nothing!" she insisted. (Or rather: "Om nom nom nothing!" as she plainly had a gobful of food).

After a short, sharp discussion, I was able to ascertain that she'd scooped a handful of cereal from the box in the high cupboard. Which may have involved her moving and using her brother's plastic step.

To be fair, she was tired, complaining of feeling a bit under the weather, and - of course - hungry. Having PWS means you're always hungry.  Which means you need your meals on time, every time. But today we just didn't play close enough attention to the clock. It was past the allotted noshing hour. So she helped herself to something.

It's unusual for our girl to sneak food. I saw her trying to hide what she'd done, and my heart plummeted. It could be a one-off. But it could be the start of something. We'll see.

By the way, they were Cinnamon Grahams, or Curiously Cinnamons, or whatever stupid name they've got now. Can't say as I blame her. They're bloody lovely.

Video is Teenage Fanclub - Sparky's Dream. (In honour of the electrician, of course).
Posted by Drakeygirl at 08:47