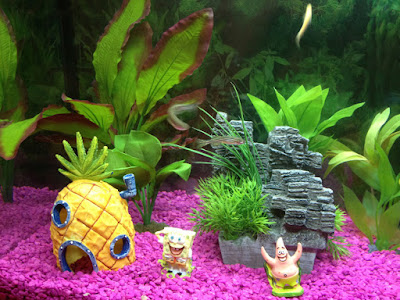 My daughter is finally the proud owner of a tropical aquarium, with four little beady-eyed fish swimming about in it.


Getting to this point has been a saga that would have tested the most patient soul.


The first one, delivered by courier, was smashed. The second one we cracked, by deciding to line it with gravel a little too haphazardly whilst under the influence of grape-juice.


The third and final one was set up, decorated with assorted Spongebob Squarepants characters, and placed on a bookshelf in our daughter’s room in time for her birthday, nearly seven weeks ago.


She was thrilled. We explained how we would have to dechlorinate any water and get it to the right temperature. We told her how we'd start off with just a a few hardy little fish, and get the bacteria going in the tank. (I had NO idea beforehand that it was so complicated. I’ve started wishing we’d gone for a gerbil).


Wide-eyed, our girl promised she would join in the rota for cleaning and changing filters. Three family members/mates promised a trip to the ‘fish shop’ to buy her some little, wiggly, finny friends.


And then we realised. In a few weeks we were about to get the entire house rewired. Which would involve floorboards coming up, and furniture moved away from walls. If we filled up her tank with the required 70 litres of water, we would never budge the bugger.


And so, we had to break the news to her.


“You might have to wait a while before we can fill it up and get some fish, sweetheart,” I said, explaining the dilemma, before softening the blow with a hastily bought extra present (another Animal Hospital toy to add to her ever-expanding collection).


She took it on the chin. With barely a wobble of the lip, and astounding forebearance, she agreed that it was best to wait. This is the girl who collapses in a sobbing heap if you mistakenly give her diet yoghurt for lunch and low-fat custard for tea instead of the other way round.


So, she's waited. And waited. At last, this weekend, we stocked the beauty up with four danios - two zebra ones, a leopard one, and a golden one.


In order, they are: Stripy, Mist, Sabor (named after the leopard in Disney’s Tarzan), and, amusingly, Justin Bieber. Aptly, he’s a little git that seems to be irritating the others.


And no. I am NOT posting a Bieber song. I shall just laugh, evilly, to myself as I secretly look forward to the day when I will be flushing Justin Bieber down the toilet.


Video is Eddie And The Hot Rods - Fish 'n' Chips. Thanks to the lovely @Beezerr for recently introducing me to this track.
Posted by Drakeygirl at 07:40