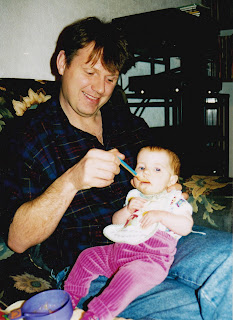 If you know your baby has a medical condition which means you can’t give them too much food, you just wouldn’t - would you?


It was an anathema to me. How could anyone ignore all the advice and allow a child with Prader-Willi Syndrome to have a diet that wasn’t healthy enough, or restricted enough? Especially as a baby. I mean, come on, who’s in charge here?


Looking back, I can remember my certainty. These people were wrong. I wasn't like them. I vowed not make the same mistake.


And then came the moment that I realised how easily it could happen.
When my daughter was a baby she couldn’t feed. Initially, in hospital, we had to use a nose-tube. Then came the long, long days and nights of bottle-feeding and trying to get the spindly-legged scrap of a girl to drink more than a few millilitres of milk. (I wrote about it in an earlier post - Alarm).


At four months old, we tried her on solid food for the first time. The usual home-made vegetable or fruit purees you spend ages making as first-time mum, and which you are always slightly disappointed by when they all turn out to look like vomit. We propped up her floppy body at an appropriate angle. We loaded up her tiny plastic spoon with squidge and got shovelling.


She loved it. It was so much easier for her to eat from the spoon than to suck from the bottle. She somehow ended up with puree up her nose, in her ears, and even on her feet, but it was the first ‘feed’ time ever that had been a pleasure and not a struggle.


For the very first time I felt I had been able to provide her with the sustenance she needed, and it was a good, good feeling.


This was when I knew. Because it had been so hard up to that point, because this new method of food delivery looked like it was going to be a barnstorming success, and because it felt so nurturing, it was incredibly tempting to give her some more.

Video is Squeeze - Tempted
Posted by Drakeygirl at 09:38