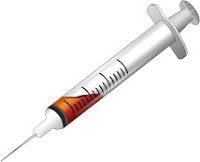 My daughter had to have a blood test yesterday.


As a season ticket holder over many years at several hospitals, she’s had this done a fair few times.

It started with her successful, if prolonged, audition as a baby-sized pin cushion in the hospital’s Special Care Baby Unit. This was just after she was born when doctors needed claret donations from her so they could diagnose what was wrong. The unit was referred to jauntily as ‘Scu-bu’ by the hospital staff (which always set off an appallingly inappropriate voice in my head singing: “Scooby Dooby Scu-bu, where are you?”).

Since then, as the years have rolled on by, whenever she’s had to have blood taken, the same thing has happened: nurses have struggled to find suitable veins in her arms. Luckily, her high pain threshold and consequent indifference to needles means this hasn't been as traumatic as it could have been. But it can be frustrating, and sometimes she starts to get worried when the process takes too long.

Yesterday's nurse, a splendid, super-efficient, chatty woman, who also happened to be clued up about all things Topsy and Tim (to my daughter’s delight), had one go on one arm, and decided not to go the usual route of trying the other one, coming back to that one, and eventually getting it on the fourth or fifth try.

Instead, she felt my daughter’s hands, which of course, were like little blocks of ice. Her feet and hands are always cold, thanks to her poor circulation (a common PWS trait).

“Cor, they’re freezing,” she remarked, and bustled off, returning with a magic trick, in the form of a bowl of warm water. “Stick your hands under the water, sweetie, and we’ll make those veins come out to play.”

Sure enough, a few faint, thin, spidery tributaries began to appear the pale skin on the backs of her hands. In went the needle, out went the blood, and my girl looked suitably awed. So did I, to be honest.

I think there’s a medical term for what happened. It’s called common sense.