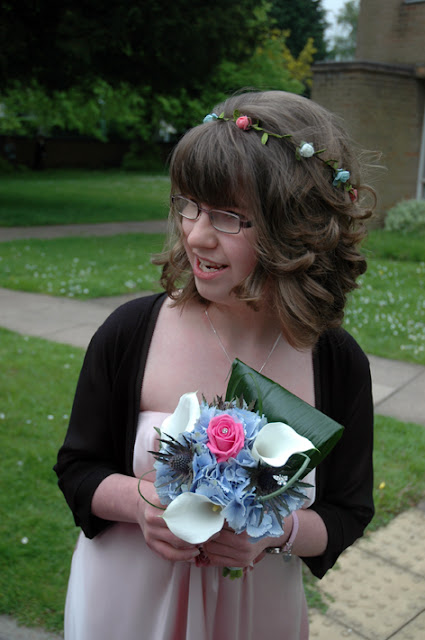 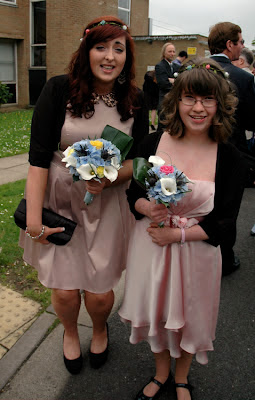 Yesterday, my daughter was bridesmaid at a family wedding.


It’s not the first time she’s been a bridesmaid; three years ago she performed the same duty for one of my best mates, and looked beautiful.

She looked beautiful yesterday, too, but in a different way. Yesterday, for the first time, she looked glamorous.

The wedding was a brilliant, non-pretentious affair: kids running riot; gingerbread men, cupcakes and donuts instead of wedding cake; and an impromptu game of football on the astroturf pitch outside the football club.

Bev, the bride, is my second cousin (don’t ask me what relation she is to my daughter, because even when I look up a genealogical explanation, I can't work it out). She was incredibly nervous when saying her vows in the register office, and the adrenalin pumping through her caused both near hysterical giggles and sobs in equal measure, which somehow managed to be simultaneously hilarious and touching.

Of course we’d made the usual plans in advance for my daughter over the food arrangements, chatting with Bev beforehand about timings and what exactly what would be available.

It was a buffet, which can sometimes be the worst possible scenario for people with Prader-Willi Syndrome. When you never feel full up, a table full of food at the side of the room can be problematic.

Not this one, though - it was in a little side room, behind closed doors, and my girl didn’t even see it. We were able to nip in, first in the queue, and fill her plate up with a veggieburger, and heaps of salad and peppers. A low fat pudding and fruit, plus a small piece of no-sugar cake to have in place of a donut, were then produced from my ‘magic’ rucksack (no classy, matching handbag for me, although I was wearing a frock, so what more do you want?). 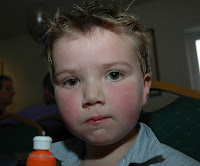 My boy was in seventh heaven, running round with half a dozen other noisy little blighters, doing Bruce Springsteen knee slides across the dance floor in their oversized suits, and going ever so slightly ballistic with excitement at the smoke coming from the dry ice machine. I imagine his reaction was pretty similar to that of Neanderthal man when he first saw fire. He only stopped leaping around long enough to eat two sausages and three cupcakes. I’d also packed him a few marshmellows as a snack - he got so hot I considered trying to toast them on his cheeks.

We left quite early. My girl is currently slightly obsessed with how loud music is and if it will hurt her ears, so as the evening progressed, and the Sister Sledge got louder, she started to fret. She also wanted to go "before her curls dropped out".  But by this point both children were running on empty, anyway.

We got home, shattered, and about as happy as it is possible to be.