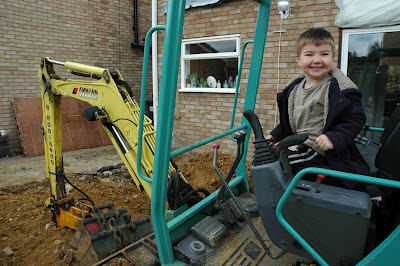 We’ve got the builders in.

The undisputed highlight of the first week’s work was me giving the plumber an eyeful when he walked in on me as I stepped out of the shower. I told the builders I wouldn’t be embarrassed by them telling the story later in the pub as long as they tweaked the facts to make me a foot taller and three stone lighter. I’m waiting to see how my daughter regales her teachers with this story, as sometimes these tales change in the telling. It’ll probably end up with them thinking I’m a naturist. Or having an affair with the plumber. Or both.

My girl has coped well with the disruption, despite her initial worries about how noisy the builders were going to be. From an early age, she’s hated loud noises around the home. Luckily Mr Drakeygirl does very little D.I.Y. (Or as I like to refer to it: ‘Swearing With Tools’).

So my daughter had a panicky few moments when the mini-digger arrived on Friday morning. We’d told her it would be breaking up the concrete floor of our demolished conservatory, and she was getting a little frantic that the mayhem would begin before she went to school.

I pointed out that as the digger was in the road at the front of our house, and our car was parked in its path, there was no way any concrete smashing was going to occur until we’d gone. But it wasn’t until we were turning out of our close that she was willing to believe her ears weren’t going to be assaulted.

We’ll see how she copes over the next six weeks or so.

I have no particular worries about my little boy being disturbed by the sound of heavy machinery. He’s learning the lingo as he watches the builders in action, misses off the beginning of some of his words in his customary manner. I’m convinced he does this deliberately because there’s only a limited amount of daylight hours, and it’s the only way he can fit in everything he wants to say.

“Where’s our 'servatory gone? Oh yeah, it’s in the 'kip. This 'ouse is going to be the coolest 'ouse in the world. Can I 'rive the digger?”

I’m not sure which made me smile the most. Watching him sitting in the cab of the excavator, making engine noises, or learning from my husband that the digger’s pointy hammer end attachment is called a pecker.


Video is Mark Lanegan - The Gravedigger's Song
Posted by Drakeygirl at 16:26