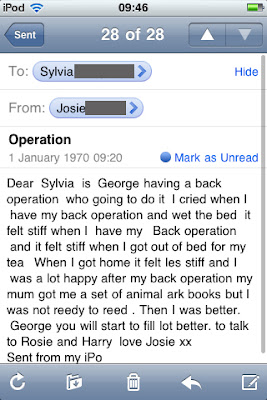 My daughter was on a mission this afternoon.

Earlier, she'd asked me to charge up her iPod touch, and now she was appearing at the doorway every few minutes with a spelling query, so I'd already guessed she was emailing someone.

When she asked me how to spell 'operation', I twigged what she was up to.

It took her about half an hour. When she announced, loudly, that she had finished, I called her into the bathroom, where I was bathing her brother, dodging handfuls of soap bubbles and telling him that if he peed one more time in the bath it would actually have more wee than water in it.

She stood at the door, pushed her glasses up from the bottom of her nose, cleared her throat, and read this out.

It's an email to a friend of mine who told us recently that her son, George, might have to have the same spinal fusion operation that my girl had.

Most of all, I love that she wanted to send this in the first place.

Video is The Pretenders - Message Of Love