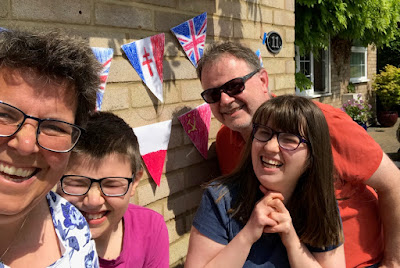 I’ve seen lots of jokes and memes on social media during the coronavirus lockdown about how people have no idea what day it is. I disagree. If you’re attempting to home-school, you know how far from the weekend you are, exactly.

So today is definitely a Friday, but not just any old Friday. It’s Bank Holiday Friday switcherooed for Bank Holiday Monday due to the 75th anniversary of VE Day, and I am mainly celebrating it for being a ‘no school’ day in a time of no school. No school squared, if you like.

I attempted a bit of mild parental responsibility this morning by chatting to my kids about what VE day meant. We cut out some paper to make bunting and got covered in oil pastels. I made a tiny bit of a ‘jingoistic isolationism leads to very bad things’ point by making sure we included not only Union Jacks but also flags from some of the other nations who had just a little bit to do with defeating the Nazis - you know, the ALLIES.

But my daughter wasn't entirely focused. She binned five pennants after colouring white bits blue and blue bits red, all because she has been concentrating on one thing, which was most assuredly not celebrating the anniversary of the end of the deadliest conflict in human history. No, it was watching a TV programme.

She has waited two years and four months for the third series of BBC drama The A Word to be made and aired, checking the TV guide every week to make sure she knew when it finally dropped. “When will Series 3 of The A Word be on?” is a question that might haunt me on my deathbed, alongside: “Will sleeping on my back make me shorter?”. On Tuesday it hit the screen, and she watched it on catch-up the next day (as it aired past her bedtime).

Today, she’s been plaguing me and her dad to watch it with her.

“Yes, we will watch it with you,” I explained. “But I’ve got to get Grandad’s medicine/cook the barbecue/write my blog/have a poo* first...” (*these activities were carried out consecutively, not concurrently, you’ll be pleased to know).

So I’m off now, to curl up on the sofa and watch a drama about the family of a little boy with autism. “Like me, Mum, I’ve got a diagnosis of autism too, haven’t I, and people with Prader-Willi have a bit of autism don’t they?” my girl will tell me, numerous times throughout the show. Trust me, she won't be able to help herself. I might put the subtitles on so I have a chance of getting some of the dialogue.

Once she’s in bed, it’s my boy’s turn to choose the viewing, and tonight will be the sixth movie in his grand rewatch of the Marvel Cinematic Universe in chronological order of the narrative. So it’s Thor. Which just makes me look forward to that time in the future when cinemas will open their doors again and I can march up to the desk and request: “Four for Thor 4”. What a time to be alive!

Song is Julian Cope - Trampoline (from the soundtrack of The A Word).

As part of the 2.6 Challenge (which is asking people to fundraise and donate towards small charities that are threatened with closure because of the effects of the Covid-19 crisis) I'm currently writing 26 blogs in 26 days.The PWSA UK is a charity which is absolutely vital for people with PWS, their families, carers and professionals who work with them. Without urgent help, PWSA UK will fold. This charity saves lives and for some people makes lives worth living. If you can, please go to my Just Giving page and donate anything you can spare - a few pence or a few pounds, it all counts. Think of all that money you're currently saving not going to the cinema. You'll still have enough left for four for Thor Four, honest.