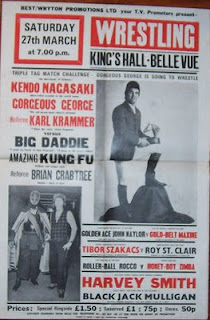 There are some people in this world who have to put up with a whole lot of wrong.


I don’t mean those unfortunate souls forced to listen to Heart FM in the workplace, although God knows, Amnesty International should be called in to save them.


I’m talking about people who are on their own and who look after disabled children.


I’ve got a fairly long fuse, and my husband is a reasonably mild-mannered chap, apart from when tackling DIY, when it’s best to leave the house, if not the country. But we're not the most patient people in the world.


So we’ve got a kind of tag-team thing going on, a bit like the old Saturday afternoon wrestling on ITV. We don’t wear the leotards - no-one deserves that - but we do swap over and climb into the ring when the other is on the ropes.


If our daughter is having a day when she’s asking the same question over and over again (see blog entry Perseveration), or if her stubborn streak is not so much streaking as stopping, digging a trench, and building foundations - it’s a hell of a lot easier for two to deal with.


The general level of frazzledom goes up into the red when one of us is working. But the needle drops right down when Big Daddy and Giant Haystacks (I haven’t got the beard) are both available and on the case. Oh, except when our psycho toddler puts on a Cyberman mask and jumps us from behind, like a miniature Kendo Nagasaki.


So I know how hard it must be for people who don’t have a partner. Whose wrestling buddy has buggered off.  And they do, you know. Years ago, a very nice woman who used to come to our house once a week to do physio and stimulation with my tiny, new, disabled daughter, happened to mention that about a third of all ‘her dads’ had slung their hook. A third of the families she visited had basically seen the father of the disabled child say “Thanks, but no thanks. I never signed up for this. I’m off.”


I can understand that initial fleeting urge to run away from everything when your child is first diagnosed with a disability. I know the panic, anger and fear. But I also know the next urge that kicks in. The animal instinct to protect your child. Their extra vulnerability only makes this feeling stronger. The idea of one of you abandoning the other, when you most need eachother’s strength, chills me.


So, I thank my lucky stars for having the opportunity to tag.


And I also have a request for any of you who have friends or family who are coping with kids - disabled or otherwise - on their own. Could you maybe step into the ring? Offer to babysit. Pop round to help at tea-time. Give their parent some space. Take the nipper out for the day. They will cherish even the smallest respite.


It doesn’t matter what the parent does with their temporary freedom. They can go off to the cinema, or to evening classes, practise the guitar, or even learn to wrestle. What's important is giving them the chance to do it.

*Video is Half Man Half Biscuit - Everything's AOR.